Award-winning novelist Trish Perry loves a good romance. She also loves to laugh and thinks others do, as well. So she incorporates touches of humor into all of her writing, no matter how serious the subject matter. Trish has written 17 inspirational romances for Forget-Me-Not Romances, Harvest House Publishers, Summerside Press, Barbour Publishing,  and Mountainbrook Ink. She has co-authored five devotionals for Summerside, Broadstreet Publishing, and Worthy Inspired. 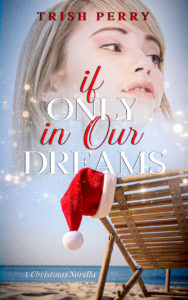 Harper Deering has figured it out. The most fulfilling Christmas celebrations go beyond the giving of gifts and involve the giving of one’s self—a mirroring of the original Christmas, so to speak. She’s organized her family’s traditions accordingly.

But the discovery of a lifelong secret on Christmas morning rocks her world and sets her on a course that challenges her ideas of generosity and loyalty. Is there such a thing as being too sacrificial to keep a loved one happy? Harper has always been a risk taker, but the relationships at stake now are all too precious. Which one is she willing to lose?  AMAZON 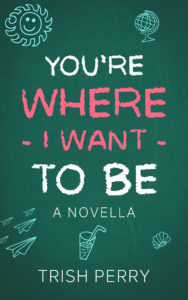 As a pregnant teen, Delaney Shaw had to grow up quickly. Now she’s forty and embracing experiences she missed as a hard-working single mom—college, independence, and…romance? No, thank you. No time for romance.

But Delaney’s grown daughter, her best friend, and a dashing-but-vexing professor might change her mind.

Delaney’s been blessed with a chance to change her future, if her past and present hang-ups can just get out of the way. AMAZON

Rachel Stanhope tries to see the good in everyone. But even her good graces are challenged when she meets cocky reporter Josh Reegan outside her Arlington, Virginia dance studio on a brisk fall morning in 1951. Their paths cross, between Arlington and New York, between the melodrama of ballroom antics and the real drama of political corruption, between family involvement and romantic entanglement. The last thing either of them expects is mutual need and support. But once they stop dancing around the truth, the results are unforgettable. AMAZON

Counselor Tina Milano has been visiting Milly’s Tea Shop regularly for the past several months. She has many friends but no steady man in her life. Zack Cooper is a local farmer who provides Milly with fresh fruit and vegetables. As a single parent, Zack is doing his best to raise his teenage son and daughter on his own.

When the kids get in minor scrapes with the law, Milly gently encourages Zack and Tina to work together to draw the teens back before their rebellious natures land them in even hotter water. At first Tina sees the relationship in only a professional capacity, but soon her friends notice the luscious scent of romance in the air and decide to help things along.

Tea for Two is a faith-filled novel that explores the delight of second chances, warm friendship, and unexpected romantic encounters. AMAZON

If you enjoy the novels of Debbie Macomber, you’ll love this perfect blend of recipes and romance set in a small town with a big heart.

Steph Vandergrift is in need of a job. She left everything behind to elope with Middleburg attorney Rick Manfred, never imagining he would stand her up at the altar. Now, hoping just to get by until she can decide what to do next, Steph thinks she’s found the perfect position at the local tea shop.

Kendall James, one of the kindest and most eligible bachelors in the area, meets Steph and proceeds to pursue her. But by the time Steph feels able to consider dating again, her runaway fiancé returns and tries to win her back. Steph is wary, but she and Rick always seemed to blend so well. Are they truly meant to be together, or does God have something else in mind? AMAZON

Franny and Grace Otterbridge were always the closest of sisters. But after their father’s death, Grace veered off in a different direction. Now Franny feels she’s lost her. Literally—Grace has gone missing. Franny assumes she’s taken off on another wild hair, but signs soon suggest otherwise. Franny accepts amateur sleuthing help from new flame Nevan Burns, a young fine artist (who’s also a fine young artist). He proves himself more than good company, and Franny finds herself swinging from one emotion to another, from joy to fear, from anticipation to dread. She’s not equipped to search for Grace alone. She’s even less prepared for what she finds. AMAZON

Trish Perry, author of the charming novel The Guy I’m Not Dating, follows up with a contemporary, humorous tale of how love and life unfold in surprising ways.

Rennie Young, heroine of Too Good to Be True, meets the gallant Truman Sayers after she faints in the boys’ department of the local super store. Despite this unromantic introduction, Tru Sayers, a handsome young labor–and–delivery nurse, seems like a gift from God. But a recent divorce and other life disappointments cause Ren to question whether she can trust her heart and God.

This clever novel encourages readers to lean on God’s leading and to be open to life after the hurt—even when it seems too good to be true. AMAZON

“So, what do I do? Just give up? Avoid him? Stop brushing my teeth and wearing deodorant? He’s so sweet. And when he says something in that cute accent and looks at me with those long-lashed blue eyes and those dimples and that cleft thingy in his chin, and have you noticed how perfect his nose is?”

Tiffany LeBoeuf has a problem. She has lost her job, her mother has recently passed away, and she has zero social life. And then she meets Jeremy Beckett. But Tiff is a new Christian and knows she shouldn’t be attracted to this unbelieving (but charming!) Brit.

And then there’s Eve….Jeremy’s girlfriend.

When Tiffany reserves a cozy beach house in San Diego for a much-needed retreat, a mix-up causes a double booking, and Tiffany ends up sharing the beach house with Eve. When Jeremy arrives to surprise Eve, he surprises Tiffany, as well.

As Jeremy settles in at the beach house next door, events and secrets unravel that surprise everyone.

Trish Perry’s Beach Dreams tells the touching and humorous story about how God uses even our mistakes to bring about His divine purposes.  AMAZON

Sonny Miller, a recent college graduate with plans to get her master’s degree in psychology, intends to resolve some family drama and put her academic interests to the test. She cleverly invites her mother, Teresa, and her mother’s estranged twin, Aunt Melanie, to a quiet and quirky California beach house. They both show up…and with surprises of their own. Teresa, a successful classical singer, brings her latest protégé, Irina, and Melanie brings along secrets about Teresa and the identity of Sonny’s long-gone father.

The strong personalities cause some big waves, and Sonny is in over her head. Soon she is drawn to Irina and Irina’s charming brother, Grigori. Her faith is strengthened by their story of being adopted as children from a Russian orphanage by a Christian couple from America.

Readers will love being a guest alongside these characters. Between each sunrise and sunset is another day for healing, laughter, rediscovering the importance of family, and embracing the hope of God’s care. AMAZON

When she attends a Washington, D.C. dinner party thrown by friends far wealthier than she, writer Maddie Travers is distracted by internal debates. Should she move back to D.C.? Should she seek work she might find more fulfilling? She meets the appealing “regular guy,” Dom Sebastiani, at the party and consequently wonders whether she’s ready to seek romance again. So many decisions! At the stroke of midnight, a shocking turn of events sets Maddie on a path that holds at least as many questions for her as it does answers. AMAZON

The setting for Cherise Paul’s destination wedding couldn’t be more romantic. So why does she feel she’s being dragged down the aisle? She doesn’t plan to run away and become entangled with the famous young actor, Niles Adair, and his film crew, but circumstances unfold exactly that way. When her fiancé, Jerry Gallagher, re-enters the scene, Cherise must decide: What does she want? What is she afraid of? What does she not understand? And who would have thought that Spanx could play such a pivotal role in one woman’s destiny? AMAZON

Elena Tafani is in control of almost every aspect of her life. But getting arrested is only the first in a number of experiences that throw her summer completely off kilter. She may know how to stage a home to show it at its best, but her life isn’t showing quite as well. There’s her runaway niece, her hard-bitten sister, her over-indulgent parents, and her judgmental clients. Then there’s Chaz, the best friend for whom she’s developing very confusing feelings. What’s a good rule follower supposed to do? AMAZON

“Yowza!” exclaims Kara Richardson when she sees the handsome proprietor of the new delicatessen in town, Gabe Paolino—who soon expresses mutual interest. This would be the start of a perfect love story, except for one thing—Kara has vowed to stop dating until she feels God’s leading.

But when humorous circumstances send Kara and Gabe on a road trip to Florida, hope springs anew. Even with Kara’s flirtatious coworker Tiffany—”a hyena in heels”—along for the ride, the uncouple begins a lively journey that could change their paths forever.

This memorable, charming story of love’s persistence captures the honor of waiting on God’s timing, and the adventure of finding the perfect guy to not date. AMAZON

Entrepreneur Edie Keegan achieves ever-growing acclaim for her popular Local Girl perfume. Her romantic life hasn’t been quite as successful, but that’s fine with her. As she insists to her matchmaking friend, Sara-Penny Butler, she’s not in the market for love. But Sara-Penny knows better, and she understands Edie and her painful past more than Edie realizes.

When Ben Walsh, the town veterinarian, turns Edie’s head, she questions whether love is worth the risk of getting hurt, whether Ben is the man for her (despite her cat allergies), and whether Sara-Penny is ever going to mind her own business. AMAZON

Bernadette Doyle thinks she’s put her life on hold for the summer, while she cares for Cookie, her aging firecracker of a grandmother. But Cookie’s run-in with a spastic dog leads to Bernadette’s run-in with a handsome EMT who recognizes “Bernie” as his past childhood love.

The next three months of rekindled romance, uncovered crime, suffered loss, and explored recovery show Bernadette that her life is not on hold. Far from it—her life has just begun. BUY NOW

Anna Chesterfield earned a six-month trip to audition for the Manhattan theater through such odd circumstances, she’s certain God had a hand in it. And the kind attention from her benefactor’s smart, attractive, newly dateable son only convinces her further. But when she encounters several moral dilemmas, she struggles to know exactly why God led her to New York. Is it time to grow up or time to grow away from the future she’s craved all her life?