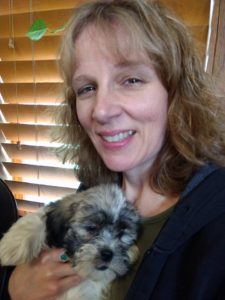 Tracy began her writing career at age five, when her parents found her writing all over her little brother. When they asked why, the answer was simple: “Timmy thought he was a piece of paper.” Clearly, her stories started early!

To Timmy’s relief, Tracy now uses a computer to write. Along with writing stories for children, she also teaches writing and speech at a two-year college in Wisconsin.

Tracy is a passionate teacher and award-winning author who seeks out creativity, goodness, and chocolate and can’t stop smiling each time she finds it. Her first picture book, Little Isaac’s BIG Adventure (2012), won a Literary Classics International Book Award. Her historical fiction chapter book, Caleb’s Lighthouse (2017), was described by reviewer Rosi Hollinbeck as “an early middle grade book that is about as sweet as they come.” Tracy’s debut novel, Fields of Promise (Winged Publications, 2021) is a Christian historical romance inspired by her adventures in Ireland and her own Irish-American family. Learn more at www.tracyhelixon.com . 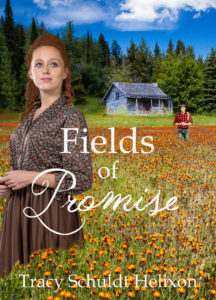 After the death of her beloved father, Irish immigrant Katherine Murphy is consumed by one singular goal. She will keep her promise to protect the family and save their Iowa homestead.

Worlds away in New York City, Jonathan Schoon’s controlling father has groomed him to take over the family business, a stifling future that gives Jonathan neither peace nor purpose. This summer, he will have one last adventure. During a visit with Uncle Heinrick on the Schoon family farm in Iowa, he plans to make enough memories to last a lifetime.

When Katherine meets Jonathan in the town mercantile, she refuses to let the handsome city boy distract from her promise to Da. But when love unfolds, both must make heart-wrenching decisions, all while summer’s clock is ticking.

Fields of Promise is a heartwarming story of family, community, faith, and purpose.  AMAZON 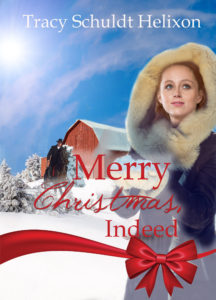 Love is not enough. Irish immigrant Katherine Murphy has learned that lesson the hard way.

Despite her fiercely independent nature, she opened her guarded heart to city boy Jonathan Schoon, who gave up the lucrative New York City future he was groomed for to court Katherine and make a permanent home in his uncle’s tight-knit Iowa farming community.

When Jonathan is called home to New York City after his mother’s carriage accident, Katherine’s familiar fears surface. She vows not to be the reason he is separated from his New York family. When he returns at Christmas to re-claim their life together, will she find her way back to him, or will their love be lost forever?