Sydney Winthrop grew up reading anything she could get her hands on, but mostly Nancy Drew, the Hardy Boys and Agatha Christie. Later, she added Ellery Queen, Sir Arthur Conan Doyle and Rex Stout to her literary consumption.

Constantly writing and re-writing in her head, a writing course at a local library encouraged Sydney to start putting the words on paper – more people could read them that way.

Sydney Winthrop is the author of Cocoa Capone, The Calico Cow Caper, Secret Society, Fibers of Freedom, The Face of Insanity, Aengus, Abba-daba and Fate, The P.I. and the Federal Marshal and Murder, Mayhem, and Marriage.

She currently resides in Greenfield, Indiana with her husband and a cat named Poirot. 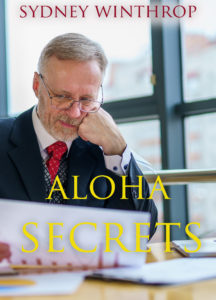 Charles “Chuck” MacKay had quite the career. Or two. From special ops utilizing his forensic accounting skills to an ordinary accountant with ordinary clients throughout Hawaii.

All that ends when his wife’s car is found at the bottom of a cliff. Was it an accident, road rage, or murder?

If it is someone from Chuck’s not so ordinary past, why was Carol targeted?

An ex-military buddy, Bruce Levine, might have answers. Will it take the resources of Bruce’s P.I. firm, Valor Investigations, to get to the bottom of this?

Chuck flies to Mapleton, Virginia to take Bruce up on his offer to help. But are the answers to be found closer to home?  AMAZON 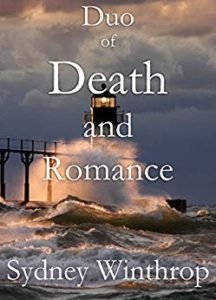 Al Capone appears to be robbing the gift shop in the tunnel; Earl and the Earlites decide to dress alike; and Ben and Brutus vie for Suzette’s attention.

Add to that a library to die for in the senior center and life is full of unpredictable surprises.

Kiki’s Cocoa Café and Cave is a St. Joseph, Michigan staple. Life for Suzette and her mother, Chloe has settled into a predictable routine – until the hubbub begins for the November 2020 elections.

A radical group has managed to put a measure on the ballot that is based on false research, and they are determined to plaster campaign posters in Suzette’s café – against her will.

Add to that Ben and Hugo’s issues with a series of deaths in Traverse City, Chloe’s mysterious emails from Oliver, a disappearing professor from Michigan State, and Suzette’s life becomes anything but routine! AMAZON

It’s Daisy Williams’ birthday month, and it’s a month she will never forget. In the midst of expansion plans for her private detective agency, she finds the body of a good friend – murdered. Her desire is for revenge, but first she must find the culprit.

Along with seeking justice for her friend and trying to decipher her father’s mysterious visits to various politicians, she meets with Reed O’Connor for the first time in over a year.

Does her friend’s death have anything to do with an old case? And if Daisy finds the murderer, does she risk disrupting her entire agency?

Bruce Douglas is finding a dead cow a week – with the heart removed – in the mountains of his Kohala ranch. Is this a bizarre homage to long dead King Kamehameha, or something closer to home? Private eye Daisy Williams travels to Hawaii to help her sister and brother-in-law solve the mystery.

When another cow is taken, the entire ranch races out to hunt down the rustlers. Daisy, the last to leave, gets lost and is captured. Will they find her body with her heart removed, too? AMAZON

A plot to terrorize a race is overheard.
A famous detective is murdered.
A centuries old society – dedicated to restoring the Hawaiian monarchy in the name of King Kamehameha – comes to light.
This tale of intrigue and murder is solved by the detective left in charge of the world-renowned Williams Agency, Nadine Debenheim. As she travels from Houston to Waimea she soon realizes all is not as it seems and not everyone is who they say they are.  AMAZON

Suzette and her mother, Chloe – the duo responsible for discovering Al Capone’s secret tunnel in Cocoa Capone – are pulled into another tale of mystery and danger.

The Labor Day weekend crowds have packed the lakeshore in Saint Joseph, Michigan as they wait for the first leg of the Tri State Regatta – the perfect escape plan for the gunman Suzette confronts inside Kiki’s Cocoa Café and Cave.

Suzette is shot at and kidnapped in a tale involving Syrian Christians, Pastor Al and his alluring friend, Brutus. Amidst the chaos, Suzette is frantically working on a Cross Stitch entry for the Fibers of Freedom show.

And if her life wasn’t complicated enough, Ben Crocker, her FBI ex-boyfriend, shows up to investigate. AMAZON

Kelsey Reed, white collar crime’s favorite forensic accountant, finds the fraud behind the false front of numbers. When she takes a job in the Pacific Northwest, she’s stalked at the Portland airport; her hotel room is ransacked; and her life is threatened by a gunman.

During the snowstorm of the century, Kelsey disappears. Between Jack Hopper – the attorney that hired her and falls in love with her, and Tee Boone – PI extraordinaire, she is found.

Does the insanity in the O’Doul family empire reside only in the mother, or does it run through the whole family? If only Kelsey can remember….  AMAZON

It’s a hot August in Houston, Texas – there’s a redundant phrase – and Nadine Debenheim is settling in to her role as CEO of the prestigious Williams Agency. Before she can get too complacent, a madman storms her office demanding her help in locating a female P.I. on the loose shooting up cheating spouses.

Robert Bellamy, U.S. Federal Marshal and Nadine’s best friend, has been keeping tabs on Tessa – Nadine’s mother. Tessa was arrested for murder but managed to beat the rap. Now she’s in Texas, working as a private investigator.
Coincidence?

And do Robert and Nadine discover there is more between them than friendship? AMAZON

Kelsey Reed, forensic accountant extraordinaire, spent months in Portland recovering from the drugs her kidnappers shot into her system. Finally ready to resume her life in Houston, a forgotten memory consumes her and she flees to the Kemah Boardwalk where she meets Aengus Kavanagh – Irishman, FBI Agent, and consultant to Ireland’s Directorate of Military Intelligence.

In an attempt to resolve a quarrel over who gets ownership of Abba-daba, a kitten the GAAWP agency has put up for adoption, Aengus and Kelsey discover the body of GAAWP’s director. As Kelsey tries to find out who embezzled a hefty sum of money from the animal society, she realizes the murder is related.

Aengus and Kelsey discover a love of cats, Corvettes, mystery, and each other. AMAZON