An award winning writer for more than 20 years, Sheila Hudson’s work has appeared in multiple editions of Not Your Mother’s Book, Chicken Soup for the Soul, Chocolate for Women and From the Heart series, as well as The Book of Hope, God Allows U-Turns, and The Expressive Heart anthology. She has also worked as feature writer for The Costumer magazine, as a book reviewer for Standard Publishing, Crane Hill, and Sharp Writing and has published in The Lookout and Christian Standard magazines as contributor. Her work has been published internationally and has even been translated into Korean. Sheila joined the Southeastern Writers Association in 1992 and has served on the Board of Directors, including two terms as President. With her husband Tim, she founded Bright Ideas, a ministry dedicated to fostering hope and inspiration through writing, speaking, presentations, and informational media. 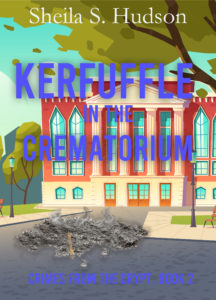 Nadia moves back to her hometown to assist her family with the family business – Carlton Manor- which is the only funeral home in Alto, GA. She is confronted by her ex and discovers a body in their hearse which has been painted Pepto-Bismal pink by the town thugs. Nadia becomes friendly with a local detective who becomes a familiar figure.

Nick and Nadia’s mom moves to Florida with the promise of funds to redecorate and buy a crematory. This idea literally blows up. Meanwhile Nick’s brother in law is assaulted in the Congo which calls for his assistance. Nadia and Sadie face a gunman, come under fire from the Mafia, all while supervising a major clean up and restoration of Carlton Manor. Nadia’s old editor enlists her to write a humor column under a nom de plume and Grave Consequences is born. AMAZON

Giles and Stephanie Hart are an ordinary couple living in a small college town. At least that’s what they appear to be. Unknown to her husband, Stephanie authored a book which became a blockbuster series. She wrote under the pen name Stella Holmes. Her true identity comes to light when a corpse is found on their doorstep with a copy of her book in his hands. Partners in her secret identity, Carol and Doris, have adventures on their own which lead to a kidnapping.

More antics ensure with a haunted hotel (The Curse) deeded to her friend, Carol. Carol discovers her roots, Uncle Harry finds a kindred spirit, and the team solves yet another mystery.

Three mysteries with the Hart family who teach and write and solve crimes in the interim. AMAZON 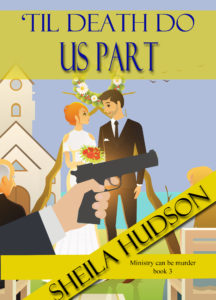 Mason and Katie set the date, but the maid of honor comes up missing. A dead body at the airport takes wedding planning to an entirely new level. Mason along with his twin, Sam, and of course, Dee follow the clues which lead to Puerto Rica, Costa Rica, human trafficking, and the underbelly of society. AMAZON

Sam and Dee Lord minister to First Church in Millville. Dee and Mattie Holcomb, her friend and partner in crime, solved the mystery of a man dying in the sanctuary. Since then life has taken a turn when Sam had a heart attack. While in the hospital, the interim minister is murdered as he gave the morning liturgy. Mason, Sam’s twin, is the new detective in town. It’s up to him and Inez, the police chief to bring the murderer to justice. Meanwhile, Katie, Mason’s fiancé and the medical examiner is kidnapped. Investigators overturn vital evidence on a prominent community member. Roger gets an opportunity of a lifetime and Mattie becomes an entrepreneur. All this and more as the Millville community becomes embroiled in another murder mystery. AMAZON

Sam and Dee Lord accepted the call to minister to the First Church of Millville hoping for a peaceful segue into retirement. That dream was shattered when Mattie, the church custodian, discovered a corpse in the sanctuary.Dee finds a Chinese coin that appears to be a piece of the puzzle and the police chief discovers a link between the minister’s wife and the victim. Sam is arrested. His twin appears on the scene and a savant solves the murder of not one but two mysteries. AMAZON

New series from award-winning author.
When Mollie McLaughlin obtained her chauffeur’s license at the Department of Motor Vehicles, she had no idea what the day would bring. As part of her duties at the Northeast Georgia Banner newspaper, Mollie was tasked to drive celebrities to the owner’s office for interviews. Her boss, lovingly called the Curmudgeon, was testing her mettle before giving her reporting assignments. Mollie was prepared for irascible clients, but she wasn’t expecting murder or that her twin would be her partner in solving the crime. AMAZON

The Anderson household is once more embroiled in a mystery when a guest in Finn’s apartment is found dead of a rare poison not found in the U.S. Finn and Mollie’s wedding plans are put on hold until Finn is cleared as a person of interest in the investigation.

Meanwhile Mollie discovers more about her past and a long lost relative enters her life. Finn is temporarily cleared of wrong doing. Phyl and her team resume their plans for the event of the year. All is well until it’s not.

Chief Hardin receives orders to arrest Finn on their wedding day. Mollie’s honeymoon (minus her groom) becomes a quest to clear Finn with evidence she can only retrieve in Cuba. AMAZON

It’s been six months since Mollie McLachlan solved Rosie Adams’ murder. Her best friend, Callie, convinces Mollie that she needs a hobby. When Mollie finds Dr. Winters’, the instructor for the hand bell class, dead she is once again a person of interest. Meanwhile her father makes contact after a twenty year absence and she discovers a half-sister that she didn’t know she had. AMAZON

When the Langford’s pet dies, the members of the Thursday Club investigate. One of Suzy’s ex-husbands, a coroner, determines that the cat was poisoned by ricin from the Castor plant. A suspicious fire engulfs a wing of Golden Palms and destroys evidence. When Hattie is taken ill, the CRASH group pulls out all the stops to find the killer. AMAZON

A cruise seemed a perfect antidote for Clara’s recuperation from her close call at Golden Palms. Tom is off to New York to finalize his memoir book deal. Ten days at sea is just what the doctor ordered. What could go wrong? Only everything. When a shipmate is threatened, then falls and hits his head and dies, the Thursday Club pool their resources to unmask a killer and much more. AMAZON

The Thursday Club ladies check into the Monastery of Good Faith for a much needed retreat. Instead of making stained glass treasures or cultivating bonsai, Clara, Roxy, Amy, Suzy, and Hattie find themselves in a sinister plot where monks continue to sicken and die. Think Golden Girls meet Ms. Marple with a swirl of Murder She Wrote. Where they venture, nothing remains the same. AMAZON

Smuggling black coral, poison victims at the monastery, and funerals for critters can’t keep the Thursday Club down for long. They are off to Vegas baby where what happens there stays there – or does it? Hattie’s niece and nephew orchestrate a bridal shower which turns out to feature not one but two deaths. Are they murders? Only time and the Thursday Club will sort that out. AMAZON

Roxy agrees to direct the community production of Arsenic & Old Lace. Auditions were enough of a nightmare when a very dead man appears in the window seat. The entire cast barely recovers from this shock when Hattie is taken in for questioning. Surprise family members are revealed and the play on stage mirrors real life. Throw in a wine tasting gone awry and a visiting chimpanzee and you have a recipe for hilarity and murder. AMAZON

All Tom and Roxy Thibideaux want for Christmas is a little peace and quiet. But that goes out the window when Amy, Clara, Howard, and Hattie arrive in New Orleans. Not to be outdone, Suzy and Tony arrive in town just in time for the rounds to the best cuisine of the city.

Instead of their Christmas wish, they get a helping of organized crime, a kidnapping, a dead Father Christmas in the hotel lobby, and a last minute wedding served up in the most romantic city in the world. Who expected anything else from the Thursday Club girls? AMAZON

With the holidays and wedding celebrations ended, you would assume that the Thursday Club would settle nicely into the new year. But you would be wrong! Howard Saunders, Hattie’s new husband, buys a former bed and breakfast to renovate for his new bride. Contractors discover a body under the flooring. Other corpses appear and the adventure begins. Who are these victims? When and how did this happen? And what are Howard and Hattie to do? Roxy and the Thursday Club step in to solve the mystery of the boneyard. Meanwhile the community determines to turn this heinous crime into something beneficial. AMAZON