Richard Hartzer is a school administrator by day and writer/blogger in his free time. His first novel, a faith-based suspense story entitled “A Confession of Faith” is poised to become the breakout hit of 2019, 2020, or whenever it actually gets published.

Richard currently resides in the Panama City, FL metroplex with his amazing wife Courtney and tolerable children Emily, Andrew, and Audrey. When he’s not making people laugh and cry with his writing, Richard enjoys watching football, spending time with family, and sitting on the back porch doing nothing. 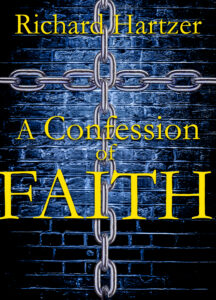 Faith Webber is your typical 18-year-old girl who faces the same issues most young adults face…with one exception. The Chancellor has sentenced her to be executed for committing treason.

As she faces death, Faith recounts a journey filled with suspense and mystery, that began when her father moved her close-knit Christian family to a country where religion is outlawed. Now that her father is away on business more often, Faith grows tired of his secretive activities, and longs for the relationship they once had.

When a handsome young man named Jakob, and his family move in across the street, Faith immediately falls in love, unaware of the secrets her new boyfriend is harboring. As Faith and Jakob grow closer together, she and her father continue to drift even farther apart. When a series of shocking revelations about Jakob and her father shakes Faith’s world, she doesn’t know who to trust, or what to do.

When Faith finally learns the truth, she finds herself trapped in an impossible situation with no easy way out. Doing the right thing will endanger those closest to her, and could force Faith to make the ultimate sacrifice.  AMAZON