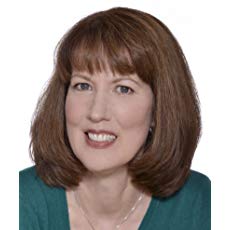 Pamela Ferguson is the author of sweet romances set in small towns. Specializing in gossips, meddlers, matchmakers and happily-ever-afters, Pam loves dreaming up complications that wreak havoc in the lives of her characters. Her determined heroes and resourceful heroines are forever doing battle with narrow-minded mischief makers. Who knew there were so many bumps on the road to love? Wings of Love, the first book in her small town romance series, has been named a 2017 RWA Golden Heart® Award Finalist. 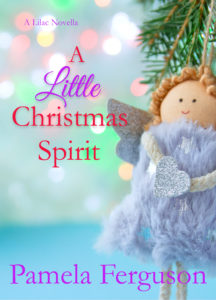 Return to Lilac for a sweet Christmas romance that will warm your heart.

Reporter Marla Norquist was planning to spend Christmas alone in the city until a mysterious tip about a secret celebrity wedding sends her to Lilac. She expects to encounter tight-lipped residents who want to protect the happy couples’ privacy—not angels, a ghost, and a handsome guy involved in a ransomware scandal!

When identity theft turns digital currency investor Jacob Reed’s life upside down, he hopes to lay low during the holidays while authorities sort things out. When Marla reveals she knows about both the scandal and his brother’s secret celebrity wedding, Jacob attempts to distract her from publishing either story. Can three mischievous angels and a meddlesome ghost convince Jacob and Marla to put aside their suspicions and discover the true meaning of Christmas? AMAZON 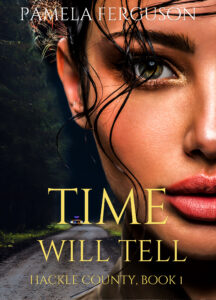 Hackle County health inspector April Islip believes handsome tavern owner Clay Nolan might be Mr. Right—until he refuses to make his customers wear masks. Local residents are riled up about COVID-19, threatening April when all she’s trying to do is save lives. When one of Clay’s irate customers runs April’s car off the road on the Fourth of July, she’s mysteriously transported back in time to 1970 and given the chance to right a past wrong. Can she thwart a dangerous plot involving Clay’s grandfather that doomed Hackle County’s future and her relationship with Clay? AMAZON 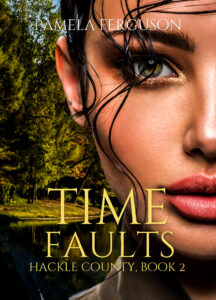 Keeping people safe shouldn’t be so hard. HACKLE COUNTY, BOOK II
Between confronting mask burners and calling out pandemic profiteers, it’s getting harder for Hackle County health inspector April Islip to do her job. Having a supportive boyfriend would be nice, but ever since she told Clay Nolan about time travel, he’s been avoiding her. To protect April from a new threat, her boss puts her in charge of COVID-19 testing. But danger finds April once again, transporting her back in time to save Hackle County’s future.  AMAZON 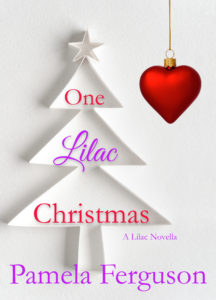 When Zachary Flynn suggested that he and Amity Belmont enlist together, he never dreamed the recruiters would reject him because of his flat feet. Now, Amity’s off fighting the war, and he could kick himself for letting his bruised ego get in the way of telling her his true feelings. If he had, maybe Lilac’s well-meaning matchmakers wouldn’t be trying to hustle him under the mistletoe with someone other than Amity.

Sergeant Amity Belmont never should have confided her fears to anyone in her Women’s Army Corps unit. When her commanding officer gets wind of Amity’s concerns, she recommends Amity set things right at home before taking on her new assignment. Of all the people she’s disappointed, Amity is worried most about Zach. She cannot ask him to forgive something she doesn’t regret. Will her surprise visit to Lilac bring the Christmas miracle they both need? AMAZON

Will Reo Greene ever learn to say no? She’s just finished organizing Lilac’s first 5K race and is swamped with online college exams. Now the mayor wants her to collaborate with Jack Warfield to evaluate Main Street decoration proposals for the town’s upcoming two-hundred-fiftieth anniversary. The last thing she wants is to work with the man who rejected her five years before, but the mayor is determined to make an example of the two former high school enemies. If Reo and Jack can collaborate for the good of the town, maybe everyone else will try to get along.
Back in Lilac to oversee the sale of his mother’s rental property, Jack doesn’t admit he’s also on a leave of absence from his new job as a Peacetalkers mediator. He got injured as a result of an unauthorized meeting, and the Peacetalkers must investigate. Even if the mayor is twisting his arm, Jack has no interest in collaborating with Reo. She’d already destroyed his college football scholarship chances. He’d be crazy to let her mess up his life again.
Will past mistakes prevent Reo and Jack from discovering their true feelings? AMAZON

Carly Day is on a mission: Make amends to her grown children and everyone else she’s hurt over the years. When she returns to Lilac to help care for her first grandchild, she quickly realizes that just because she’s sorry doesn’t mean folks are ready to forgive. Even Pete Warfield, her son-in-law’s uncle, keeps her at arms’ length, as if he’s afraid she’ll run off again. How can she prove she’s turned her life around?

More knowledgeable about carburetors than car seats, Pete Warfield should have his head examined for agreeing to help take care of a three-month-old baby. After a short marriage decades before, Pete’s been happy with his bachelor existence. That is, until Carly Day returns to town. Working with her around the clock to care for his grandnephew has him wishing for things he thought he didn’t want. Like love and a family of his own.  AMAZON

Even though it sometimes feels like she lives in a fishbowl, hair salon manager Sunny DeStefano loves small-town life. When self-made businessman Buck Day returns to Lilac for a family wedding, Sunny realizes her feelings for him are as strong as ever. Will gossip and judgmental people keep them apart?

Buck once believed that moving away from Lilac would help him escape his family’s troubled past and get over his crush on Sunny. Now that he’s back, he realizes he wants a family of his own. Will Sunny risk getting involved with a loner whose family is as broken as his? AMAZON

Lilac. Where paths cross, sparks fly and love blooms.
Bridal dress designer Chloe Belmont can’t believe her good luck. She’s been invited to participate in a charity bridal vendor auction for the daughter of a Wall Street billionaire. Maybe now the women of Lilac will finally appreciate her dress designs.
New York executive Luke Stratford can’t figure out why his billionaire boss has sent him to keep Chloe Belmont away from his daughter’s bridal vendor auction. What should’ve been a simple business negotiation turns personal when Luke realizes he has feelings for Chloe. As Luke discovers the real reasons for this assignment, will he be able to choose between doing his job and protecting the woman he loves? AMAZON

June 1944. Despite her determination to be in Paris to welcome her father home when he escapes from a prison camp, interpreter Christine Arnette must obey when the French Resistance sends her on a secret D-Day mission to Normandy. When her cover story falls apart, the Allies start asking questions. Can she trust them with the truth?

When Lieutenant Harry Dean discovers their beautiful French interpreter lied about her reasons for coming to Carentan, it’s up to him to discover her identity. His gut tells him to trust her, but orders are orders. Is she really a spy? Will his heart allow him to stand by and watch if she’s arrested?  AMAZON

As a motorcycle dispatch rider in London during World War II, Maggie Cameron faced her share of dangerous situations. Yet none filled her with as much dread as the thought of moving to America to join her G.I. husband, John MacPhee, after having been separated for six months. Except for the beautiful Blue Ridge Mountains, everything in Lilac is different from her beloved Scotland. How long before John discovers his Scottish bride is completely unsuited for life as a banker’s wife?
Life in the orderly MacPhee household has been completely upended since John’s return from the war. His father’s sudden injury puts John in charge at work and at home, leaving little time for battle scars to heal. Will Maggie forgive him for dragging her away from the country she loves and into his chaotic life? AMAZON 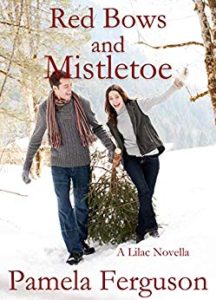 Cole Higginbotham ditched his elf hat for good when he quit his family’s lucrative year-round Christmas business. He’s finally found peace as an orchard caretaker—until one night when a mysterious speck of light appears, flitting among the apple trees.

Herb farmer Noelle Arber must harvest enough fresh mistletoe to decorate Main Street or she’ll forfeit her much-needed contract fee. After she convinces Cole that she’s not a mistletoe poacher, he surprises her with an offer. Give him a copy of her detailed orchard map and he’ll help her decorate Main Street. AMAZON 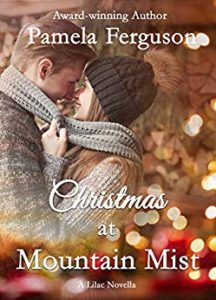 Did you come here to visit or to hide?

Dr. Brady Thomasson has his hands full. Christmas is two days away and he’s the physician in charge at Lilac’s senior living community. A mysterious illness, blizzard conditions, and a skeleton staff would be enough to keep even the most seasoned medical professional on his toes. Will the unexpected arrival of his former girlfriend distract him from his duties?
With a brewing scandal about to crash down on her head, environmental lawyer Camille Zignetti drives through a snow storm to spend Christmas with her ailing grandfather. Certain she will pay a price for her employer’s bad behavior, could Brady blame her for wanting to hide from a situation she’d helped to create?