Kent Wyatt was born and then he died. Wait a minute, I’m getting ahead of myself. (Whew! I’m glad I put that part in because, for a second there, I thought I was dead.) Now that you know the beginning and the ending of my story, let’s go a little closer to the middle…

Actually, my novels are “our” novels, produced by the team of Kent and Rebekah Wyatt. My wife, Rebekah, will always be quick to tell you she is not a writer, but she contributes greatly to the finished product of our books. Rebekah (whose official title in the Wyatt Republic is Minister of Household and Finance) is a voracious reader of Christian Fiction. In the Wyatt writing world, she serves as (among other things) editor, researcher, manager, financial planner, contributor to the story board, plot, and characterization, and of course the final word on all things romantic. So, when you see our characters behaving like ladies and gentlemen instead of blowing snot, passing gas, and belching—thank Rebekah. (Disclaimer: the second half of this sentence was not Rebekah approved.)

So how did such a partnership ever get started? I mean really, a man and a woman, together, they’re so different. Whoever came up with such an idea? Oh. Sorry, God. Great idea by the way. (Disclaimer: the preceding portion of this paragraph was not Rebekah approved). Of course such an unlikely alliance could only begin in somewhere remote and mysterious—like the flatlands Northwest Kansas.

I was born there. Rebekah was dropped there, like a tornado drops a rare orchid in the middle of a wheat field. Both our early days were, like most young lives, bizzare in their own ways. Mine full of the mundane misadventures of the son of a firmly planted fourth generation farmer, and Rebekah’s comprised of the exotic escapades of a traveling evangelist’s daughter. When we were in our early teens, we met and fell madly in opposite directions and both skinned our knees. For the few months that her family stayed at our farm, we rode horses and performed magic shows together, but then Rebekah’s family was off to the next ministry opportunity. Over the years, we both strayed from God’s plan in our own ways and then were thrown together again in our late twenties. In a few months, we were married. God has rescued us from our own imprudence, grown us in our understanding of His plan, and bound us together for His purpose. We love Him greatly because He has saved us exceedingly. Our prayer is that through our stories we might introduce others to THE ONE who longs to do the same for them.

To understand how this whole writing thing began, there is one thing you need to know about Rebekah: She is a faithful helpmate to her husband and selflessly supports his dream far better than he deserves.

There are two things that you need to know about me: I was born a writer, but I became a cop.

As a child on the lonely plains of Kansas, I always enjoyed reading and telling stories to the other kids. When I was thirteen years old I read R is for Rocket by Ray Bradbury, and I decided I wanted to write stories like that, ones that haunted you and made you think. John Boy Walton became my hero, and I was going to change the world with my pen. Over the years, I learned that I wasn’t Ray Bradbury, but God had given me a writing voice of my own and He could use that if I would let Him. The only problem was I didn’t have enough life experience so…

When I was seventeen years old, a car almost ran my mother and me off the road. With my terrified mama holding onto the dash beside me, I pursued the other vehicle in my 1973 Mercury Montego and forced it to pull over. It was the town drunk doing what he did best. He came at me, and I knocked him down and picked him up by his belt and threw him in the back seat of his car to sleep it off. My mother decided that I should be a police officer. She knew that writing nonsense was never going to get me anywhere.

In 1983 she saw an ad in the paper saying a small town nearby was looking for a police officer. She convinced me to apply. But all the time I was being a cop, the bite I received from the writing bug became infected and grew septic. I fed the fever over the years with short stories, award winning poetry and a humorous newsletter that I put out for a growing email list. Another life changing event was when I read This Present Darkness by Frank Peretti. It helped get me back on track with my faith and introduced me to Christian Fiction. I had found the direction God wanted me to go with my writing. Foolish fans encouraged me by saying that they loved my newsletters and re-read them when they wanted a good laugh. Many even said I should write a book. With my law enforcement career and my family to raise, I could never commit to writing fulltime. So, I satisfied myself with learning the craft and producing short works. After 32 years, I ended my law enforcement career. I still have many friends walking the thin blue line, and I have a deep love for the profession. But God seems to be telling me it is time to fulfill my other destiny. Now, with God’s help, maybe my writing can change the world after all. Where are my old reruns of The Waltons? Look out, Ray Bradbury, something Wyatt this way comes.

You can find Kent on the web at the following locations: 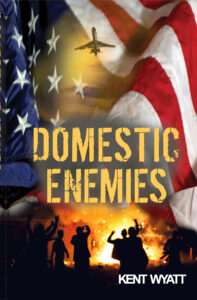 Little seeds we sow, and someday they will grow. What if the ill weeds our society wades in today were being planted decades earlier? What if someone had a chance to uproot them?

In 1988, an American warship accidentally shoots down an Iranian civilian jetliner. In 2014, whole families are being murdered in middle class neighborhoods in Colorado Springs. Everyone is looking to Lieutenant Darrell Jacobs, one of the only amputees able to return to police work with a mechanical hook, to find the murderer before he kills again.

Bioelectronic genius Callie Williams has followed Darrell’s inspirational story and decided he is a gift from God to test her high-tech prosthetic arm. But Darrell, with scars both inside and out, is not the Godly man she believes or remembers him to be. He also comes with enemies—the face that lurks in the lost parts of Darrell’s memory and the God Darrell can’t forgive. They both want to finish what they started.

Facing clashing elements of faith and yearning, Darrell and Callie must battle a social engineering expert with an agenda that takes homeland security to a whole new battlefield and will leave you with the uneasy realization that locking your doors will be useless. 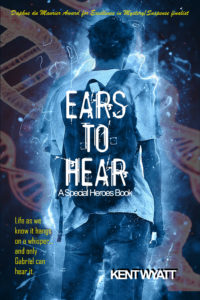 Amelia’s brother, Gabriel, hears things – practically everything. His autism gives him savant auditory abilities. He heard the men who were planning to kill them in the park. It could have ended there. But Amelia couldn’t leave and let them catch the mysterious man who saved them.

In a madcap turn of events, the artisan jam maker finds herself experiencing the life and death struggle of espionage. But things are getting even more intense. The agents want Gabriel and Amelia to help bring down a powerful organization that is using genetic testing in an antisemitic plot. Did God plan Gabriel’s gift for such a time as this? They will need God on their side because someone else is in the game, and the other side’s plan might equal two wrongs with no right in sight.

The more she discovers, the more Amelia grows to trust and care for the mysterious man. But even his skills might not have prepared him for this type of foe or the bizarre twist the mission takes. As circumstances suck Amelia and Gabe farther into the operation, she realizes what they face threatens the deepest fabric of humanity and will challenge how the team members view life itself. AMAZON

Talisa’s sister with special needs is missing. Who can she believe: The handsome psychiatrist she hoped might help her cope with her parent’s death or her sister’s friend who has God-given visions through the eyes of people in trouble? The man she had hoped would heal her might be a killer. The man she trusted like family might be a deceiver. The gift she believed in might be a fake. And, the only person who can help her is the one man she can’t forgive. Humor and suspense collide as Talisa discovers how little she really knows about the people around her and herself. Can she see beyond it all, to where the truth and true love might finally set her free? This twist filled story takes you to the Ozark county of Gilead, Oklahoma, where on the shores of Lake Gallant, you will find: Talisa who is struggling with depression; her neighbor, Sawyer, a psychiatrist to the criminally insane, who Talisa had hoped might be her answer; Luke, the witty sheriff with a talent for deceiving the deceivers and manipulating the manipulators; Janie, her sister who struggles to communicate; and Teddy Baskins, the “Enigma,” who is either amazingly gifted, or a clever charlatan. Get ready for a wholesome story that will make you laugh, cry and challenge you to see beyond. AMAZON