Judy Goodman Howard is a retired elementary teacher and a lifelong resident of southeast Missouri. A book lover from childhood, she enjoys a good mystery and has written several poems and a few short stories.

A special interest in the nineteen-thirties, forties, and fifties has prompted her to revisit those years through the characters in her novels.

Her hobbies include collecting anything having to do with dogs, foxes, and turtles, playing the piano, memorizing scripture, and of course reading and writing. 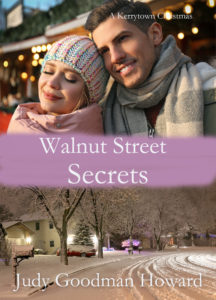 MIKE SHEPARD returns to his Missouri hometown with an old green pickup for wheels and a ton of regret for baggage. After a decade of dreams fulfilled, followed by eleven months in limbo, his mental turmoil intensifies when he learns of suspicions surrounding his father’s death.

Elementary teacher CARLENE HAYES senses Mike’s struggle and vows to help him through it. But when several local people are victimized, things become more complicated than either Mike or Carlene could have anticipated.

With the help of City Chief of Police Dustin Robbins, the two search for answers and reach a shocking conclusion. AMAZON 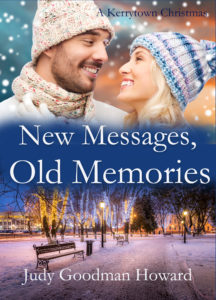 KELLY STEVENS teaches fourth-grade in Kerrytown, Missouri, where she hopes to establish a new beginning and bury the memories of a day that changed her life forever. She was thrilled to have her students chosen to kick off the local tree lighting ceremony with a song directed by her, but her joy is short lived when strange texts and Facebook messages threaten the safety of her and her beloved charges.

BLAKE WARNER, master mechanic and experienced private investigator, meets Kelly under less than desirable circumstances and becomes intrigued with the situation—and the pretty teacher. Kelly’s troubled behavior concerns Blake and, following an attempted sabotage at Kerrytown Elementary, he fears for her life.

As the list of suspects mounts, the intensity of the situation increases, and Blake and Kelly find themselves in a race against time. With the help of Kerrytown’s chief of police and a kid named Leon, they work to identify the perpetrator and bring him or her to justice before things get out of hand and someone doesn’t survive Christmas. AMAZON

Bachelor Sam Whitley, a.k.a. Uncle Sam, is a lifelong resident of Kerrytown, the county seat of Marley County in Southeast Missouri. A journeyman mechanic at twenty-three and self appointed guardian over his widowed older sister and seven-year-old nephew, his only unfulfilled dream is that of opening a garage of his own one day. When a weird crime occurs and Sam’s nephew begs him to keep his beloved schoolteacher, Miss Bailey, safe, Sam agrees and unknowingly takes on a responsibility, and a relationship, he’s not sure he can handle. AMAZON

Katie Gallagher isn’t looking for love—at least not for herself.
Her dad is dead, and she feels responsible. Her mother and sister are alone in St. Louis, and Katie wants to find a man who’ll love and care for them and make them a family again.

Zeb Harlow has no time for a wife.
His home life is in shambles, his mother and brother are in danger, and he sees no way out.

When tragedy strikes their small rural community, concern escalates to terror. Zeb and Katie band together to locate the guilty parties before another crime can occur. Will their joint effort be in vain? Will the results reach farther than either of them could have anticipated?

If you enjoy a good clean mystery with a touch of romance, consider paying a visit to book one of the Bluebird Valley series—Dreams and Secrets. AMAZON 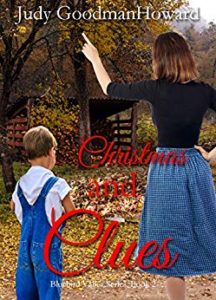 It’s 1939 and Lawrence Alan Jackson, rejected by his community because of a past over which he has no control, is fleeing St. Louis in search of—something. Convinced that trouble follows him, the last thing he wants to encounter is another dead body.

Ruth Gallagher, a city girl turned country, has no thought of her most painful memory resurfacing and threatening to rip her heart out all over again. But when Jackson shows up at her house in rural Missouri—with a crime to report—old hurts and unanswered questions transport her to a time and place she never wants to revisit. Or does she?

When her young cousin is terrorized and turns to Jackson for support, Ruth’s concerns escalate. Can Jackson be trusted? Will he be able to supply the support and protection the child needs—or is he in need of protection himself? Will Ruth and Jackson’s shared interest in solving the crime lead to peace and safety in Bluebird Valley, and in their scarred relationship? AMAZON 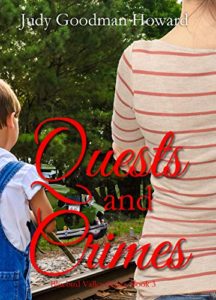 A budding young nurse in Post Depression Southeast Missouri, Sophie fears repeating a tragic mistake—at the expense of another life.

Sy Hawkins has given up all hope of a career in radio and moved to rural Missouri to care for his aging uncle and tend to the old fellow’s goat farm. Sy’s only focus is on this man to whom he feels he owes everything.

When an accident occurs, and Uncle Joe’s life is in jeopardy, the elderly man makes a decision that will affect both Sophie and Sy. Can they pull together in a common quest to make his wish come true before it’s too late? And will their efforts result in a quest of their own—changing both their lives forever? AMAZON

It’s 1943, and she’s been hired as teacher at Upper Bluebird Valley School in the Southeast Missouri Ozark foothills. Eager to share her love of music and books with as many children as possible, she anticipates the first day of school—but what begins as the fulfillment of her lifelong dream turns into her worst nightmare.

Single dad Bob Kelly resides in the valley with his two young adopted sons. When Randi shows up on his property, he’s thrown for a loop and forced to make a quick and difficult decision. His peace is shattered when a senseless crime, coupled with a series of unique threats, causes him to fear for the safety of his boys—and their teacher.

Bob and Randi, both with too much at stake to make failing an option, band together to solve the crime. Will the recent discovery of one particular bit of evidence add new fervor to their crime solving efforts—and their growing commitment to each other—or will it drive Randi away from the valley forever? AMAZON 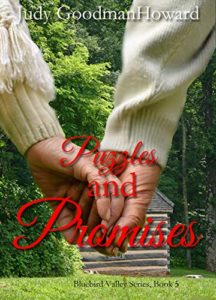 Army veteran, MASON HOOD, has a promise to keep and a demon to defeat. Fresh off the front lines of World War Two, he moves to Bluebird Valley in rural Southeast Missouri and brings the war with him.

Local schoolmarm, STELLA REYNOLDS, is still reeling from the death of her husband at Pearl Harbor. To honor his memory, she vows to assist and protect any veteran who comes her way. But Mason isn’t just any veteran.

When a brutal murder sets the entire valley on edge, Stella is told that Mason needs her. She rushes to his side and ends up in a place she never wanted to revisit. Torn between reaching out to Mason and battling demons of her own, Stella joins forces with the veteran and sets out on a quest to expose the killer. As their relationship develops into something more than partners in crime solving, Stella strives to help Mason overcome the trauma that threatens to immobilize him. Will her efforts succeed, or will two worlds crumble in the process? AMAZON 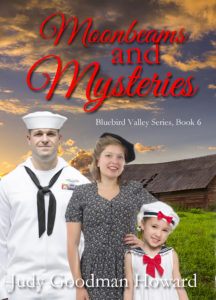 A sailor with a purpose he hadn’t planned, a lady with a plan forced by another’s decision, and a little girl with a decision no seven-year-old should feel the need to make.

WALTER BAILOR, U. S. Navy veteran at twenty-eight and eyewitness to Pearl Harbor, returns to rural southeast Missouri and discovers everything has changed. Especially Walter.

Twenty-five-year-old LORA DOUGLAS and young Bonnie Sue, newcomers to the area, hide secrets that could result in danger to the pair—or worse.

When a man is found dead in the drugstore where Lora works, and Bonnie Sue claims she can recognize murder, Walter’s peace at returning home is shattered. Concerned for Lora and the child’s safety, he becomes their self-appointed protector. But when strange events and threats occur in their valley, will Walter’s help be enough? AMAZON