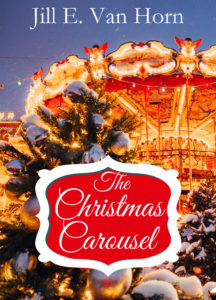 Only child and seamstress Holly Edwards is forced to move out from under her mother’s protective wings, and out of Baltimore, after her boyfriend calls it quits, citing her neediness and inexperience in life as the cause of his unhappiness—she doesn’t even know how to make him a cup of coffee!

But when her golden retriever Abbey digs up a time capsule in her garden that turns out to contain a treasured family heirloom of a local business tycoon, she’s swept away in her dreams by a gentlemanly carousel barker named Joe who’s plagued with regrets. He challenges her to grab for the brass ring and save the run-down Merrysville Amusement Park and the legendary Christmas Carousel. Simple right?

Not if Joe’s grandson, Hunter Ashworth, has his way. When he and Holly first meet, she realizes more than Hunter’s Armani suit needs altering. Unfortunately, she must convince this materialistic, brazen, (and not to mention super-hot), CEO to reconsider tearing down the park and building their company’s new furniture factory in its place.

But maybe they can teach each other a thing or two about finding real happiness and true love along the way—and even remember the past that they’d shared as children.

And enjoy the ride!

Sparking a nostalgic tone as in Charles Dickens’ A Christmas Carol, The Christmas Carousel is a delightful journey that breeches the dimension of time to unite the losses of the past with the hope of a promising future. A true Christmas miracle.