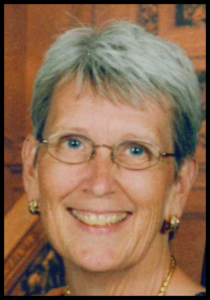 Janetta Fudge-Messmer is an award-winning inspirational author who resides in Florida, or wherever the wind blows, with her husband of 34 years. She’s received Honorable Mention for an article from Writer’s Digest Magazine. Her article, “A Working Relationship” was published in Guideposts Magazine. Guideposts Books published, “Shorthaired Miracle”. Janetta and her husband Ray, along with precious pooch Maggie, became fulltime RVers in 2012 and enjoy traveling around the USA in their Minnie Winnie. 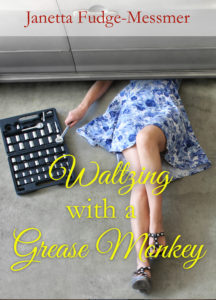 Penelope Price contemplates dating her boss (Derek Hamilton) again. But all they talked about the last time was vehicles they worked on at the auto shop that day. Along with her job at Hamilton Auto Repair, Nell also teaches ballroom dancing at her mom’s studio.

And to top off her crazy job schedule, she takes a “Finding Your Spiritual Gifts” test at her church. This sets more things into motion than Penelope ever dreamed of – one being the day her two professions collide. She won’t be able to dance her way out of this predicament.

Will Penelope’s newest dance student (Harrison) waltz into Priceless Dance Studio and steal her heart away? Or will Derek’s gifts of wit and wisdom win her over in the end? AMAZON

Samantha Barry prays aplenty before she returns home to take over her dad’s handyman business. Her boyfriend promises to follow her, but his arrival keeps changing.  While she waits, she runs a Help Wanted ad in the paper. Her ex-fiancé applies, and Sam’s father hires him. Sparks fly and it has nothing to do with electricity. Will Pigtails and a Tool Belt survive with them working together, or is the Lord lending a hand in orchestrating her ‘happily ever after’?  AMAZON 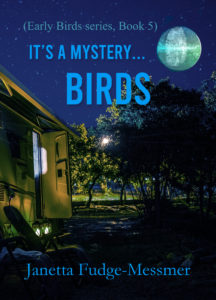 When Betsy Stevenson signed up for the writer’s conference, she thought she’d see her Houston friends and learn more about the craft of writing. However, rain, canceled flights, and a chance meeting with Dillon McCloud (a mystery writer and keynote speaker) turns her life into a back-to-back adventure.

And the mayhem has to include Rose Wilford, Betsy’s bestest friend in all the world. Especially since she ‘happens’ to show up at the writer’s conference, and she isn’t a writer. While she’s there – Rosie invites Dillon to join them on a girl’s trip in her RV. The famous writer accepts.

Monday morning, they’re on the road. And they are no more than fifty-five miles when suspense and intrigue come knocking at the RV door. Not to mention seeing lingerie where you’d never expect to find undergarments.

It’s a mystery, for sure.

Follow the Early Birds, plus one, on a journey where snooping around leads them to more than clues. It may even include a little matchmaking amid criminal activity. Is there actually a crime, or is it all a marketing ploy for the mystery author to sell her latest novel?  AMAZON

Before the Early Birds leave Florida, on their trek up the East Coast, Rose shares another idea with her friends on how to help humanity. They love it, but the concept needs a little fine tuning. One thing is for sure, they’re not letting Rosie out of their sight. The rest of the trip. When they do, she’s liable to do something to alert more than the media. Buckle up for more merriment and mayhem from all of the Early Birds. AMAZON

The Early Birds, or at least the female part of the famed group, have flown the coop (Florida) to help Mary Miller’s niece, Jennifer McDonald. She owns an eclectic shop in Estes Park, Colorado, and it needs some sprucing up.

Another subject that require Jenny’s full attention is her longtime boyfriend, Peter Webster (he’s left town for parts unknown). Another topic on her mind: her beloved VW Bus (Petunia only runs when it wants to).

While Mary Miller, Rose Wilford, and Betsy Stevenson are in Colorado, they try to convince Jennifer to hire someone so she can scoot on up to Rocky Mountain National Park to paint, paint, and paint some more. Use the gifts the Lord has given her.

Peter returns, but when he explains his absence and adds, “it’s complicated,” Jenny’s left to wonder if their love will survive their lack of communication skills. Or will they learn communication comes in more forms than talking to each other?

As with all the adventures that include the Early Birds, you’re sure to have a grand time on the road with the ladies. And Peter won’t disappoint you either. You will fall in love with him too. Rose says, “He’s a keeper.” AMAZON

Betsy Stevenson is praying fervently for a change. But when a big part of her prayer is answered she asks the Lord, “Is this really You? An RV, of all things.”

According to Ben (her hubby and a workaholic), he thinks retiring at 60, buying an RV and traveling is a grand idea. He says, “I’ve been talking to Matilda (their pooch) and the Lord and I feel it’s a go.

After much more prayer and preparation Betsy agrees and they begin the journey to downsize into a 38 foot 5th wheel. Then their RV adventure begins. Their best friends Rose and Larry Wilford tag along and the four get On the Road Again.

Yes, Willie Nelson joins them – if only in song – on the highways and byways of this great country called the U.S.A. While on the road the foursome encounter a near miss with a lamp post, a not-too-happy proprietor at an RV Park, and a 1000 year flood that hits Colorado.

Can the four of them survive their travels together and learn to live, laugh and love more and grump less? Or is the Lord taking them on this path to learn more about themselves than they ever wanted to know? And in the end, do they find it is better to give than receive?

Follow along with the Early Birds on their adventures and I’m sure you’ll want to join up with them ASAP. All you need is a sense of humor, willingness to change, And, of course, a recreational vehicle. Any size will do.  Buy Here

Continuing the saga in this Early Birds sequel. This Christian fictioncomedy, has Rose and Larry Wilford hitting the highway on their next RVadventure. Ben and Betsy Stevenson are right behind them in their 5thwheel. Filled with fun, fellowship and a few fiascoes! AMAZON

Janetta Fudge-Messmer is a Christian author/editor/speaker. Along with her hubby Ray (of 34 years) and their pooch Maggie, they became full time RVers in 2012. Most of the year is spent traveling the US in their Minnie Winnie. During some of the winter months they play snowbirds in southern Florida. Both give Janetta plenty of ideas to write about.

Her affiliations include American Christian Fiction Writers (ACFW), Toastmasters and various writer’s groups. These groups have made a huge impact on her writing, editing and speaking abilities. The seven years in Toastmaster’s gives Janetta a platform to tell funny stories, as well as write them.

Janetta has always penned stories about her quirky life. Fiction writing seemed a distant dream until they went full-time RVing. Her debut fiction novel, Early Birds, tells of a couple’s travels in their RV. Is there more truth than fiction “on the road again”?J She says, “Living inside a small space with my beloved and a dog that sheds always brings plenty of laughter. And, I wouldn’t change a single day of it.”