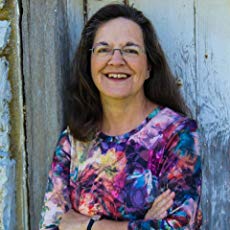 Carol Nemeth has always loved reading and enjoyed making up stories since junior high school, most based in the places she has lived. She served in the US Army where she was stationed in Italy and traveled to over thirteen countries. After marrying the love of her life, who she met while stationed in Italy, they lived in a lot of places, including North Yorkshire, England. They now live in West Virginia, where, in her spare time, Carol enjoys sewing stuffed animals for the local ambulances to give to sick and injured children that they respond to calls for and baby blankets for the Local Birthright organization, a Pro-Life group that provides help to young pregnant women. Carol and her husband are active in their church and enjoy their two grown children, son-in-law and two grandchildren. A third is expected soon and Carol looks forward to spoiling that one, too. www.facebook.com/J.CarolNemeth/ 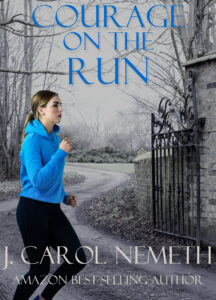 Casey Hartman checks handsome Will Kerns into Belmont Inn, her family home passed down through generations. He claims to be on vacation, but when Casey witnesses a murder, Will flashes his DEA badge and takes her on the run. His real mission is to seize a drug operation in the historical town of Belmont. Casey can’t believe this is happening in her little town, much less that she witnessed a murder.

Will is determined to take down the drug ring and the man leading the operation, but can he do that while running with Casey? She wasn’t part of his mission. Will soon realizes this courageous young woman of faith has stolen his heart.

However, no amount of love will prevent a determined killer from finding them, no matter where they hide. AMAZON 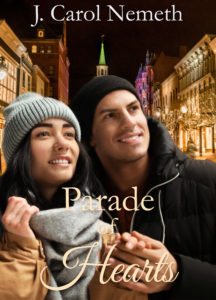 New to Old Colorado City, Hannah Overman is excited about the success of her bakery. However, Hannah’s elation is soon overshadowed by the fact that her position on the Christmas parade committee isn’t going as well she had hoped. The mayor has taken a dislike to her and doubts she can do her job. The committee voted unanimously in favor of her idea to invite recently returned troops from Afghanistan to march in the Christmas parade. Hannah soon finds one particular Army captain is more than willing to lend a hand. However, when things turn sinister in the old town, Hannah and Capt. Caleb Ryan are caught up in something no one ever expected. Between lemon crumb muffins and threats aimed at Hannah, tension grows as the little western town prepares for the Christmas parade. Can Caleb determine what’s going on and who’s connected to the threats? His Grandpa Ed, the town pharmacist, and the whole Ryan family become involved. Hannah quickly finds herself supported by the town folk who have welcomed her as their own, but is it enough to stop the one person who’s determined to take her out? AMAZON

When Molly Walker graduated from college, she was thrilled to be hired on as a ranger at Deep Creek Campground in the Great Smoky Mountains National Park. She arrived ready to begin her career and to enjoy all the aspects of her new job, but the one thing she hadn’t counted on was the local poachers and their illegal shenanigans. Molly and fellow ranger Jake Stuart try to put a stop to the escalating poaching problem while protecting the animals. In the meantime, Molly finds that the handsome ranger, who is also a local, is a great partner to have on her side. She also finds that she’s losing her heart to him when she’d planned to stay focused on her career. Can she give her heart and have a career? She and Jake find themselves in a battle against a group of men with a hidden agenda far more sinister than poaching. Can they be stopped before Molly’s life is snuffed out? AMAZON

When Kate Fleming arrives at the Grand Canyon National Park, she’s anxious to begin her new job as park service liaison to an archeological team. However, artifacts begin to disappear and the lead archeologist is found murdered. Kate soon receives a deadly warning as well, so archeologist Ethan Wagner steps in to safeguard her. Although Kate finds herself captivated by her ruggedly handsome protector, she already lost love once and refuses to surrender to those feelings again. After a second murder occurs, park police are determined to locate the killer, but it may be too late when Kate finds herself in the crosshairs. AMAZON

National Park Service biologist Ruth Campbell discovers a body on the beach near Cape Hatteras Lighthouse. Her life shifts out of her comfort zone, but not nearly as much as when the newest park policeman, attractive Gage Hampton, arrives to take her statement. She’s determined to stay as far from him as possible. Scarred by her past, Ruth attempts to avoid young men, but she realizes that avoiding Gage Hampton will be harder than she thought. Another body washes up with the surf, and Gage is intent on discovering who the killer is. When Ruth’s uncle, Owen Lawrence, arrives searching for a long-lost treasure, both Gage and Ruth find themselves pulled into the search, and things become sinister as the killer grows desperate. Can they find the treasure before the killer does? Or will he silence them and sail away with the treasure too? AMAZON 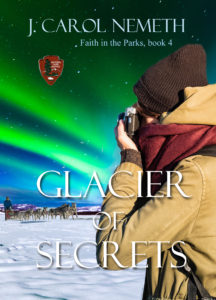 Photographer Maggie Lawrence is excited about her new assignment at Denali National Park, that is, until her excitement is damped by Ranger Troy Donovan’s refusal to escort her into the wilderness for photos. When an Alaskan senator arrives and Maggie’s assignment changes, Troy is ordered by the powers that be to help Maggie out. When things turn deadly and the senator’s life is at risk, Troy and Maggie find a connection between a thirty-three-year-old Soviet defector’s record and a photo Maggie took on her first day in Alaska. While Troy is investigating deep in the park, Maggie and the good senator are kidnapped. How can Troy rescue them when he must stay on mission? There are foreign operatives in pursuit, and he can’t stop now. This woman who once stirred his refusal of help has stirred other feelings he’s buried deep inside. Now all he can think of is rescuing and protecting Maggie Lawrence.  AMAZON 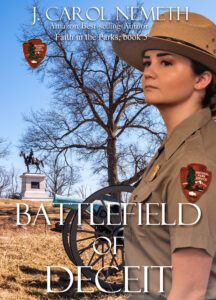 A diary on loan to the museum.
An old Civil War house on the edge of the battlefield.
Could these two things be connected?

Gettysburg National Military Park historian, Chloe Rogers, begins her research into both: to prepare for a donor event and to discover if it can be restored for public viewing. Chloe and her fellow historian, Clifford Weston, discover a virtual Pandora’s box in the cellar beneath the house revealing more questions than answers. Park policeman, Blake Hunter, becomes embroiled in the old house mystery but gives Chloe cause for concern when her widowed heart responds to his attentions. She’s simply not ready to move on. Is she?

When unwelcome things begin to occur, they realize they have to discover who’s behind them and soon. Will Chloe find the answers in a packet of old letters discovered in the cellar? Then there are the unexplained footsteps…. AMAZON 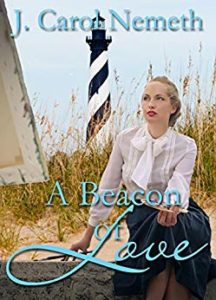 Word is the new man in town, Mike Kelly, is an author writing the next “Great American Novel.” Librarian Ava Sinclair knows that’s not true. He spends too much time fishing and trekking around Cape Hatteras Island. But when men in a black car show up and follow Ava, not only does handsome Mike Kelly get involved, but Ava’s older brother, Sheriff Martin Sinclair does as well. Who are these men and why are they following her? It’s 1928 during Prohibition and things take a sinister turn when rum-runners from Chicago use the sleepy North Carolina town of Buxton to further their criminal enterprise. Can Mike and Martin protect not only Ava, but Buxton and beyond from their corrupt plan? Ava finds herself falling for the blue-eyed stranger who won’t tell her why he’s here. Can he protect her before she disappears from Cape Hatteras for good? AMAZON

Jillian Spencer is bound and determined to make it as a topnotch newspaper reporter, but in 1940, that’s no easy task. Her chance comes when the president of the United States arrives for the dedication of the Great Smoky Mountains National Park and her job is to report on this auspicious occasion. On her way to cover that story, her editor-in-chief redirects her to another news-worthy event, the Tuckaseegee flood, a catastrophic occurrence that occurred two days earlier leaving the lives of many mountain folks in shambles. While gathering information for the article covering the flood, Jill finds herself in a life or death situation.

Cameron Murphy, park ranger at Deep Creek Civilian Conservation Corps., is thankful to have been at the right place, at the right time. He soon learns that the woman he’s just rescued has a tender heart deeply touched by the suffering of his neighbors. He’s more than willing to help with her newspaper article, but as her dark eyes and determination pierce right to his soul, dare he hope that she’ll turn her tender heart toward him? AMAZON

American Jessica Montgomery arrives in WW I England to be greeted with the horrible news that local vagrants and homeless folk are being found murdered. With a killer skulking through the North Yorkshire Dales, she and Grandmother Morag McDonald fear for the safety of the orphans living at Hope Orphanage. With the help of local Dr. Garth Samuels, they do all they can to protect them. Is it a deranged individual who is the harbinger of death or could it be something far more sinister? As they search for answers to end the horror, Jess learns who she can and cannot trust, but it may be too late when she finds her own life in danger.  AMAZON 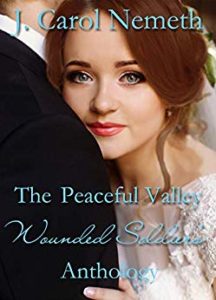 Welcome to Peaceful Valley Rehab Center where wounded soldiers come to rehabilitate. Dr. Alex Hunter, a disabled veteran himself, returns home after years away serving in the military. Turning his family inheritance into a rehabilitation center, he gives these war-weary men and women the help they need to heal. Along the way, not only does Alex find love, but love comes calling for others too. This faith-filled short story series will keep you turning pages to find out what happens next. AMAZON