Faye Roberts started her writing career after winning a contest through Guideposts Magazine in 1988. She wrote for various inspirational magazines and published a book of devotionals for working women. Her first novel, Fragile Treaties, was a finalist for a Willa Award in 2002. Since then, Faye has worked on a historical fiction series, weaving actual historical events into the lives of four mothers and daughters that run the Silver Cross Ranch from 1897 to 2010.

As a writer, I bring the lessons of history to the modern world searching for true heroes. It is said that the more things change, the more they remain the same. We all have the same desires, hopes and dreams of those who came before us. We want a better life for ourselves and our children. We want to belong, to matter, and to make a difference. No matter the era or the circumstances we are born in, we want strength, acceptance and peace. The intention of my books is to bring that kind of hope to my readers. 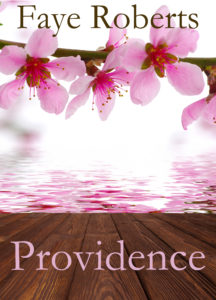 “It’s your mother. I’ve had a bit of an accident. Call when you can.”

When Annie Duncan arrives at the old family farm house in the middle of a peach orchard that had been her childhood home thirty years earlier, she’s forced into the hardest decision of her life. Katie McKenzie’s injuries from a fall off a ladder were minor, but the cancer prognosis was not.

Is Annie willing to quit her job, the only source of income since the divorce, and in doing so, lose her house, the only security she has left? Moreover, does she have the fortitude to watch her mom die a little day by day as she walks that final journey of life? Isn’t that what Hospice is for?

When an orchard biologist named Joe knocks at the kitchen door, his business card clarifies Annie’s decision as she reads the quotation on the back by Robert Louis Stevenson – Don’t judge each day by the harvest you reap, but by the seeds you plant.

“Do you believe in providence?” Joe asked.

“Providence is like the seed inside a peach. The essence, that golden kernel of life, is tucked safely inside the armor of a protective outer pit. Providence is simply the shielding care of God, like a mother’s protection of her child in the womb—the seed that will someday bear its own fruit.

With eternal spring on the wind, Katie has one final commitment to keep before she’s ready to reap her harvest—one final seed to plant after the hard winter—that seed of providence called hope. AMAZON

Was Louisa Cody a nagging shrew, as Buffalo Bill Cody claimed when he twice tried to divorce her? Or was this beautiful, dark-haired French woman a saint, enduring her husband’s long absences, recklessness with money, indulgence of liquor and relationships with other women?

Growing up in a secure St. Louis family and schooled by nuns, Louisa Frederici was unprepared for the hard life of making a home in what was still considered the Wild West. Due to the Civil War, her beaus had been few, so it’s no wonder she was smitten with a rugged army scout named William F. Cody and agreed to his proposal within weeks. Hours after their marriage, the newlyweds boarded a steamer for the west where Louisa followed her husband from post to post and dream to dream.

While “Willie” learned the art of entertaining dignitaries on buffalo hunts, Louisa learned to skin sage grouse and shoot a gun with her horse in a full run and a child strapped to her breast. She prepared antelope for a Russian Grand Duke while tending to toddlers and shooing Pawnee from the tiny kitchen of her crude cabin. Louisa would later say those days were the happiest times of her troubled and often lonely marriage. The more famous “Buffalo Bill” became, the more heated came the conflicts. The scandalous courtroom drama of her refusing his request for a divorce played out nationwide in newspapers.

In 1910, the final season of old age brought with it a truce after the couple was locked in a room together. Only William’s death in 1917 would end their fifty-year marriage. One thing is certain—without Louisa Cody and her talents and business sense, there would not have been a world-renowned figure still revered today as “Buffalo Bill”. Yes, theirs was certainly an intimate and yet stormy relationship. But then again, is there ever a perfect marriage?

Shrew or saint? I’ll let you the reader decide. AMAZON 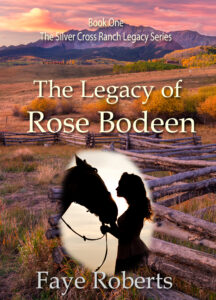 Imagine for a moment, being gifted old journals written by your foremothers. Four generations of thoughts, heartaches, challenges and triumphs. What secrets did they keep inside? What lessons could they give you now?

Marina Townsend is given such a gift after the death of her mother, with a stipulation attached. She must put the old diaries into books to be passed down to future generations. In other words, she must first accept and inherit her heritage before she can inherit the land. What starts as a simple narration, ends up changing Marina’s life in ways she could never imagine.

Her first challenge is Great-Great Grandma Rose Bodeen, born in 1877. A hard-living kind of girl, Rose can out-ride and out-cuss any hand on the Silver Cross. After being jilted, she finds adventure waiting beyond the boundaries of the ranch: Buffalo Bill and his Wild West, and love with all its joys and heartaches. But just as her wise Mama said, the land draws her back like the sun draws flowers from the ground in spring.

Rose’s writings detail matter-of-fact conviction and bull-headed tenacity, as she strives to survive and prosper during the many changes of her time: the Great War, the fight for a woman’s right to vote, the Industrial Revolution and replacing horses with machines, the high-kicking 1920’s and the Great Depression. She lives thrilling triumphs, and suffers deep despair that tests her faith and fortitude. Through it all, she comes to accept the ‘anvil time’ that comes with being the proud caretaker of the Silver Cross Ranch. AMAZON 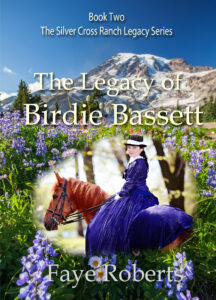 THE LEGACY OF BIRDIE BASSETT is the second novel of a four book Silver Cross Ranch series written in diary format. The series details the one hundred year history of the ranch, and the women who become caretakers of the land. The family saga is appealing to those who enjoy United States history, the western lifestyle, and to readers that love lessons taught by women of grit, who with faith and tenacity, convey hope for the future, the power of forgiveness, and the grace of knowing that each step taken during life’s sometimes rugged journey, leads to a bright coming home. AMAZON 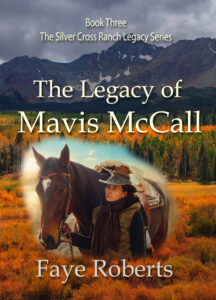 Imagine for a moment, being gifted old journals written by your foremothers. Four generations of crushing sorrows, difficult challenges and wild triumphs. What lessons did they keep inside? What lessons could they give you now?

Marina Townsend is given such a gift after the death of her mother, with a stipulation attached. She must put the old diaries into books to be passed down to future generations—

The Legacy of the Silver Cross Ranch.

Marina must first accept her heritage before she can inherit the land. What starts as a simple narration, ends up changing Marina’s life in ways she could never imagine. After completing Book One—The Legacy of Rose Bodeen, her great-great grandmother, Marina’s second challenge is Rose’s daughter—Book Two, The Legacy of Birdie Bassett, her great-grandmother.

Third in line of the Legacy is Mavis Bassett McCall. Gramma Mavis as Marina knew her. What she finds inside the covers of her grandmother’s journals is shocking, heart-wrenching and life-changing. How could she have been so wrong about her grandmother, the woman she thought she knew?

A country girl, Mavis Bassett is more at home on a horse than in a dress. All she wants after graduating from Union High School is a grand palomino and tuition to the Colorado College of Agriculture, but father Marshall has other ideas of what a lady, and his daughter, needs.

In Mavis’s lifetime, the world shifts on its very foundation, as does she. The Great Depression rocks her family, as does World War II and its tremendous challenges and loss. She enlists in the Women’s Army Corp, determined not to let evil win. And though the Allies win the war, Mavis comes home tired, defeated and carrying heavy secrets. Only after returning to her beloved land does she finally, truly heal. With hard work and keen foresight, she moves the ranch, and herself, into a bold new era.

THE LEGACY OF MAVIS McCALL is the third novel of a four book Silver Cross Ranch series written in diary format. The series details the one-hundred-year history of the ranch, and the women caretakers of the land. The family saga is appealing to those who enjoy United States history, the western lifestyle, and to readers that love lessons taught by women of grit, who with faith and tenacity, convey hope for the future, the power of forgiveness, and the grace of knowing that each step taken during life’s sometimes rugged journey, leads to a bright coming home. AMAZON 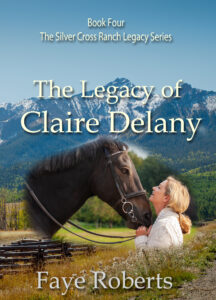 Imagine for a moment, being gifted journals written over the past one hundred years. Four generations of thoughts, heartaches, challenges and triumphs. What secrets did your ancestral mothers keep? What lessons could they teach you now?

Marina Townsend receives such a gift with a stipulation attached—put the diaries into books to create The Silver Cross Legacy. What starts as a simple narration of the lives of Rose, Birdie and Mavis, changes Marina in ways she could never imagine. The fourth and final book is the hardest of all for her to write—that of her mother, Claire Delany. Written during the final year of Claire’s battle with cancer, her mother reveals deep secrets, along with kernels of wisdom that lead Marina to make hard choices about the ranch, her marriage, and the way she’s leading her life.

A lady rancher is a rare breed of woman with a spirit of survival branded into her soul—an enduring legacy passed from one generation to the next. AMAZON