Award-winning writer David Finnern has spent over 35 years searching for shipwrecks, sunken aircraft and lost relics. He has published hundreds of stories on underwater exploration and written on-assignment for such magazines as Skin Diver, Western and Eastern Treasures, Wreck Diver, Underwater USA, Western Diver and Immersed. Finnern is the author of several books, including the critically acclaimed Passage Through Deep Water and Lost Below, and has been a featured speaker throughout the United States and on international and national television. He is a member and former president of both California Wreck Divers, Inc. and The Adventurers’ Club, and was elected a Fellow of the Royal Geographical Society in 2002. 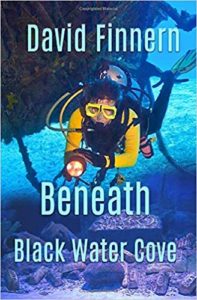 Capt. Roy Henry had searched for countless shipwrecks and submerged relics, from a sunken train in a remote mountain lake and lost aircraft in a jungle river to Spanish galleons in the Caribbean. But he’d never encountered anything quite as challenging as his current project. The adventure began when an enigmatic gentleman approached him offering a small fortune to locate a riverboat lost in 1866 in the treacherous waters of Black Canyon on the Colorado River. The river steamer was laden with gold bullion, yet that didn’t seem to be the mysterious man’s primary motivation. Then, as if searching for a treasure ship didn’t have enough problems, an archaeologist from the Department of Interior was now onboard his vessel, claiming an early submarine had been lost on or near the wrecked riverboat. Add to that a troubled 13-year-old nephew under his care, then a ruthless treasure hunter who’d stop at nothing to get the gold, and you have a formula for intrigue and adventure in the historic southwest. AMAZON 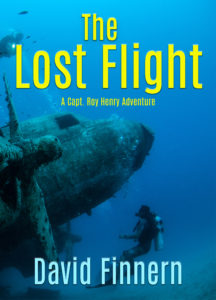 A LOST BOMBER
A SECRET CARGO
A DEADLY MYSTERY

Capt. Roy Henry, his thirteen-year-old nephew and his search team no more than finish searching for a shipwreck and lost submarine when they’re immersed into the dangerous world of international intrigue.

Deep below the waters of Papua New Guinea lies a sunken World War II bomber, but the tranquil scene deceptively lures the team of adventurers into a mystery as unfathomable as the ocean itself. The enigmatic aircraft was on a secret mission, carrying a deadly cargo, when it was shot down in 1944. Making it out of the sinking plane and into the jungle was a minor victory as the aircrew tries to survive in one of the most hostile environments on earth.

The incident is all but forgotten with passing time until Capt. Roy Henry and his team are hired to find the long-lost bomber. But his investigation unleashes a torrent of trouble, as spies, terrorists, pirates and Henry’s crew all collide in the foreboding waters and jungles of Papua New Guinea in The Lost Flight.  AMAZON