Darlia Sawyer lived in many of the western states through-out her childhood. She now lives in Western Colorado and considers it to be a blessing. Beautiful scenery, rich history and great weather to enjoy it all in.

She lost her husband of twenty years in 2004 after dealing with medical issues his whole life. Her relationship with Jesus and her daughter and two sons helped her through those days.

She married Ken in 2007 and together they have three boys and three girls, just like the Brady Bunch. All the children are now adults and they’ve added two son-in-law’s and two adorable granddaughters to the family. There are sure to be more additions in the future. The support from her husband, Ken, has given her the opportunity to follow her lifelong dream of writing full-time.

There have always been two constants in her life. The love and strength found in her relationship with her Heavenly Father and her love for writing and history.

She hopes her writing will inspire hope, a passion for life and honest emotion when you read her stories. 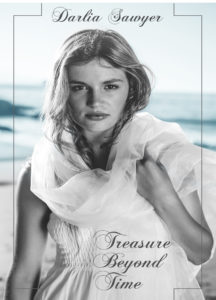 Olivia Hanson is on the trip of a lifetime in Florida.

She joins a team of treasure hunters in search of artifacts from a fleet of Spanish ships that sank in 1715. Separated from her group in the midst of a lightning storm, a frightened Olivia falls through a sink hole – and finds herself in another time.

Captain Gabriel Rodriquez and a handful of his men survived the horrific hurricane. Abandoning their ship as it sank into storm frenzied waves, they made their way to the nearby shore. Were the others in their fleet as lucky? The remains of eleven ships are strewn along the coast. Now, lack of food and water are not their only concerns. Ruthless pirates and angry natives also threaten their chances of survival.

Olivia wanders into their camp and turns Gabriel’s life upside down. Her story is too crazy to believe. Has she been injured and lost her memory? Olivia’s vulnerability leads Gabriel to make a hasty decision he may come to regret.

Olivia longs to return to her own time, but their decisions may prevent her return.

Can they let go of their pasts in order to find their future?  AMAZON

Private Investigator, Shane Wyatt, has endangered the lives of everyone he holds dear. When given the opportunity to right his wrongs, Shane believes his luck has turned.

Taken captive to pay a man’s gambling debt, Ella Brown finds herself face to face with a past she’s never known. After Shane saves her life, Ella begins to wonder if his bizarre tale might be true.

Neither of them can foresee where this adventure will take them as it forces them into a battle between greed and forgiveness. Ella will have to abandon the story she’s believed her whole life in order to find the truth. AMAZON 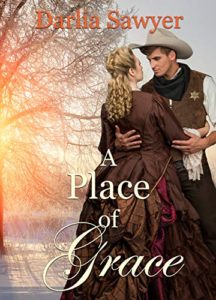 Drake West loves his wife, Noel. The responsibilities of being sheriff leave him little time for her and cause them to drift apart. A rash of arson and murders entwine him in a plot where the price of failure is everything that matters.

Noel West is frustrated with being alone and too accepting of Banker Charles Steele’s flirtations. He plays on Noel’s loneliness and vulnerability. She’s naïve to who he really is as he pulls her into a world of deception and lies.

Charles Steele is obsessed with the sheriff’s wife. He has secrets which will tear the town apart and prove he’s not the upstanding citizen he claims to be.

In a moment of certain death and with their relationship in peril, could a Christmas miracle save them? AMAZON

Saving an outlaw’s life on her way to Texas hadn’t been part of Sophie Knowles plans. It pushed her from wanting to be a doctor to becoming the first female doctor in the small town of Nacogdoches. Acceptance won’t come easy, but Sophie’s determination keeps her moving forward.

Wesley Johnson can’t shake the guilt from an apartment building fire which left him and his infant sister, Katie, orphaned in New York City. After living in an orphanage, at fifteen he flees his past looking to earn a better life for them both. After seven years and feeling like a failure, he contacts the orphanage only to find out Katie is on an orphan train heading west.

Luke Nelson had proven himself a valuable foreman on Joshua Brown’s ranch. His luck with women left him disheartened. Maybe he was meant to be alone.

A gang of cattle rustlers threatens their tiny town, throwing their lives into a passionate pursuit of justice. Will the gang’s ruthlessness destroy all they hold dear?

Can Sophie prove her ability under pressure while Luke and Wesley search for the acceptance and healing their hearts crave? AMAZON

Grace Bolling grew up loved and sheltered in the small fishing parish of Bridlington, on the coast of England. In the fall of 1910, her life changed dramatically the day her parents sent her to York, to work as a seamstress for her aunt, a well-renowned dressmaker for the nobility.

Lord William Stanley, second in line to inherit the family’s estate, has always been the good son. Yet never good enough for his father. Williams’s father, Earl Richard doesn’t accept his son’s defiance in not honoring a marriage arranged by Lady Elisabeth Ashfield’s parents. Is William willing to reject the expectations of his family to find companionship in the blue eyes of a seamstress?

Grace is swept away by the handsome Lord and unsure of where it might lead. Their attraction draws unwanted attention from those with a different agenda for their lives. Will threats of violence and intimidation keep Grace from finding love with a man she can never have? AMAZON

Thrown out on the streets of New York City, and doubting God’s existence, Anna Wilson accepts a job at the Children’s Aid Society. As an agent for the Society, she travels the west on trains full of orphans in search of families and homes. Because of Anna’s personal heartache and loss, she devotes herself to placing the children in only the very best families.

After an embarrassing introduction to Texas cattle rancher, Joshua Brown, a widower, Anna makes a surprise visit to his ranch. Their encounter throws them into a series of events which neither one was ready for. Can their mutual attraction overcome the differences and past heartbreaks as they fight to save the children in their care? One man bent on revenge could destroy it all.

To live out their destiny they must find strength together. Will they? AMAZON

Orphaned at seven because of her mother’s suicide and her father’s abandonment, Emily Hayes, finds love in the arms of her grandmother, Barbara Stuart, an avid Elvis fan.

Barbara trusts almost every man she meets. Emily has only known one man she could trust. However, a chance encounter at a concert with a handsome cowboy and his grandfather may change their perspectives.

Luke Morgan is a rancher and volunteer fireman. Luke relies on only one person in his life, himself, and he doesn’t see that changing. His grandfather, John Morgan, thrilled audiences as an Elvis impersonator in his youth. But after his wife’s death, he struggles to find happiness.

Neither Luke nor Emily want to be in a relationship, but their grandparents budding friendship keeps bringing them together. A mutual attraction blossoms between them, but will ties to their pasts pose an obstacle to their future?

Emily and Luke struggle to let go of the forces which are crippling their emotions as their grandparents stand with them. Will they embrace the peace and hope of a better life that comes from being tried by fire? AMAZON