An avid reader by age seven, Clari Dees loved to hang out at the public library, and the local bookstore staff knew her by name. Her favorite books ranged from Marguerite Henry’s horse stories, to Louis L’Amour’s westerns and Grace Livingston Hill’s romances. Her fascination with books and libraries continues, and Clari now works as a public librarian by day and a writer by night. When she’s not locating books for an overdue term paper or tracing down a missing genealogy link for patrons at the library, she can be found at her computer plotting the lives and fortunes of hapless fictional characters. You can visit Clari on her Facebook page at www.facebook.com/ClariDees or drop her an email at cdeesbooks@gmail.com. 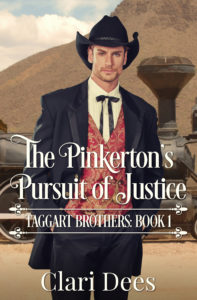 He’s searching for justice. He just didn’t expect it to be her.

Pinkerton agent, Tremain Taggart, has dangerous criminals to investigate and apprehend. He doesn’t have time to escort a petty thief to Denver, but the quicker he completes the assignment his superior ordered him on, the quicker he can return to more important cases. However, the straightforward task promptly turns into the most complicated, chaotic chase of his career, and if he ever gets his hands on the elusive Miss Justice, he will be sorely tempted to wring her neck.

All Emmalena wanted was a tiny corner of the world to call her own. But after running away from the circus—the only life she’s ever known—all she’s found is trouble. And now she’s on the run, again. This time with a disturbing Pinkerton hot on her trail. If she can’t outrun or outwit him, she might have to risk her heart and actually trust him.

She’s the assignment he didn’t want. He’s the complication she didn’t need. But together, they might be exactly what they were each searching for. AMAZON

Kellan Campbell, principal singer with chart-topping musical group KWESTT, longs for roots and a family to call his own, but he’ll settle for a vacation from the fast-paced, demanding life of touring. Shedding his well-known stage persona to avoid recognition, he heads for a backwoods Missouri campground to rest and recuperate in the great outdoors. But his attempts at avoiding people are stymied by the campground’s energetic, quick-witted manager. He’d be annoyed if he wasn’t starting to look forward to her company and crazy sense of humor.

JoyAnne loves her job as manager of the flourishing family campground. After being tossed upside down and shattered, her life is finally feeling safe, predictable, and secure. And she’s determined to stay right where she’s at, doing what she does best—ensuring guests enjoy their camping experience.

The sassy, fascinating woman soon reignites Kellan’s desire for a home and family, and he tempts JoyAnne’s scarred heart to risk love again. But when mishap strikes and Kellan’s full identity is revealed as a result, JoyAnne pushes him away to protect what remains of her heart. Will she release her tightly-gripped control to God so that a future with Kellan is possible, or will the music that brought them together ultimately rip them apart?  AMAZON

Trevor Diamond, singer and violinist for KWESTT, didn’t plan on spending his vacation teaching at a youth camp, but his recent brush with the law earned him the adult version of a time-out. Now he’s stuck playing babysitter to a bunch of squirmy anklebiters at the campground with the funny name. The only thing that might make his summer bearable is his new coworker—the pretty one with the wildly colored hair.

Tayleigh Jones’s dysfunctional childhood instilled in her a deeper cautious streak than her brightly striped blond locks would suggest. But with college out of the way and her mother and brother doing well, she can relax a while. Life is finally on an even keel, and her summer is looking bright and easy. Especially after Trevor Diamond walks in and introduces himself as the newest addition to the youth camp staff.

Without warning, Tayleigh’s past reinvades her life, ripping open old wounds and stirring up trouble she’d thought safely locked away. When she discovers Trevor is at Wad-A-Wa as a result of the same types of choices that nearly destroyed her family and landed her father in prison, her feelings of betrayal threaten their budding relationship. Can Trevor convince Tayleigh he’s changed and to risk taking a chance on him, or will the summer end up being one they both wish to forget? AMAZON

When a paparazzi-hating performer meets a music-avoiding journalist, sparks flash brighter than cameras at a press conference.

Tyrone Diamond doesn’t trust the media. Too often, reporters fabricated full-blown scandals out of nothing more than a single scrap of information or a complete rumor, and he intends to stay as far from them as his profession will allow. But when a journalist arrives to travel with KWESTT for a series of in-depth articles on the group, Tyrone realizes he’ll have to keep an eye on the attractive, nosy woman to ensure none of his friends become the next victim of the tabloids.

Sam Michaels is not happy to be assigned to a fluff entertainment feature. She’s on the trail of another big story and KWESTT is not it. But to keep her boss happy—and her job—she’ll have to shadow the popular music group to write the articles. She likes the assignment even less than she likes music, but if she digs deep enough, she might uncover the real stories behind the entertainers’ wholesome, family-friendly façades. Everybody has secrets, and she won’t let Tyrone’s handsome face distract her from finding them.

Can a mistrustful musician and a jaded journalist discover that although some secrets are better kept, some are better shared? Or will past experiences and old prejudices keep them from discovering the best secret of all? Love. AMAZON

In a singing school full of musical talent, Grace Butler is the odd duck who has none. She loves music, however, and has become the summer school’s volunteer gofer and Jill-of-all-trades. So when the substitute piano teacher appears to need help learning how to lighten up and smile, she readily takes on the new challenge. But as the sadness in his eyes gradually gives way to a beautiful smile, Grace realizes that if she isn’t careful, Westin will take her heart with him when he returns to KWESTT.

After agreeing to fill in as a last-minute instructor for an old-fashioned singing school, Westin Grant finds himself surrounded by vivid illustrations of what he desperately wants but has never really had—family. As painful as those illustrations and reminders are, though, Westin can’t help but be drawn to the fascinating woman he meets at the school’s registration table—the one who’s never met a stranger, or a crisis she couldn’t handle. A woman who’s never known anything except a loving family.

Before long, Grace and her delightful family worm their way into Westin’s heart, giving him fresh hope for his future. Can he abandon his obsessive search for biological relatives long enough to learn that love and family are about more than genetics? Or will an unexpected discovery destroy Westin’s longstanding dream of finding the family he belongs to and everyone he’s come to love? AMAZON

He once voted her off a talent contest. She’s his newest opening act. The stage will never be the same.

Sawyer Slade has it all: talent, fame, money, and women. But with all his friends marrying off, he’s become the odd man out. Dealing with his dysfunctional parents, however, is enough to keep him firmly single. Until a determined redhead causes him to revise his opinion—of her and of marriage.

Madison Laine has spent years proving to herself that she’s more than a snap judgement from a heartless talent judge. Now she has the opportunity to prove it to him. But the longer she’s around Sawyer, the more she sees the man behind the persona. And that man is someone all too easy to like.

When two stars collide, which one will fall first? AMAZON 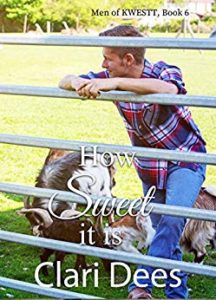 He’s big.
She’s little—but don’t call her that to her face.
He doesn’t care for ice cream.
She makes and sells it for a living.
He loves kids.
She doesn’t—unless they’re the goat variety.
He bought the property she wanted.
She now has a new neighbor.
What could possibly go wrong?

Victor Barrett is becoming more and more enamored with the diminutive owner of The Creamery, but to say Libby Larkin is less than thrilled with his plans for a boys’ camp next door to her home is putting it mildly. Experience has made her wary of teenagers at best and fearful of them at worst. Can Victor convince Libby to step out of her comfort zone and give him and his boys a chance, or is their relationship doomed from the start? AMAZON 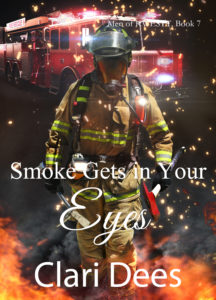 They weren’t looking for love, but it’s a fire that might be impossible to put out.

Firefighter Ben Butler has a job he loves and family who love him. He doesn’t need anybody else—especially not of the pretty female type. He still carries scars from the last relationship he attempted, and he’s decided to be content with the life he has. Unfortunately, his coworkers have other ideas.

Chiropractor Zayne Quinby is on a hiatus from dating and is determined to keep her focus on more important things. Like her family and career. But between her meddling grandfather and a good-looking fireman who seems to show up everywhere she turns, that’s easier said than done.

Car accidents, fires, and well-meaning friends and family contrive to repeatedly throw Ben and Zayne together. But just as they decide to take another risk on love, a coworker’s revelation reignites Ben’s deepest fears. Will Ben and Zayne’s relationship survive the flashover, or will their future go up in smoke? AMAZON 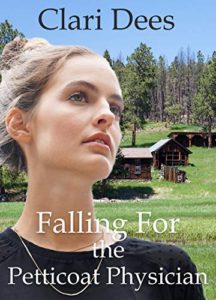 She’s a woman in a man’s profession.
Puma Ridge needs a doctor, but they never expected a woman to step off the stagecoach in response to their advertisement, and no one wants to be the first to use her services. Dr. Charlotte “Charley” Adams isn’t afraid of a little skepticism and disapproval, though. She overcame much bigger challenges while becoming a physician, and sooner or later, need will outweigh the townsfolk’s reluctance. So why does the disapproval of one grouchy, gray-eyed stagecoach driver thoroughly rattle her customary composure and resigned heart?

He hates the profession.
Experience is the best teacher, and Cooper Knight has enough of it to know that physicians are bad news. However, his protective instincts won’t let him ignore the pretty tenderfoot when she gets herself into trouble, and before long, he begins to see the woman behind the medical bag. But when an unexpected discovery fractures their developing relationship, will Cooper allow forgiveness to heal them both? Or will the tragic mistakes of the past destroy their future? AMAZON