Cappy Hall Rearick, author of fourteen published books has won numerous awards for her writing. She is a syndicated humor columnist, having penned five successful columns.

Cappy attended the University of South Carolina, the Chicago School of Interior Design, Los Angeles Valley College and Penn State University. She was a Flight Attendant for American Airlines, an Interior Decorator, a kindergarten teacher and an actress. In 1968, she was chosen as an Outstanding Young Woman of America.

Cappy’s first novel, The Road to Hell is Seldom Seen was nominated for the Georgia Author of the Year Award. It was her second nomination.

Her more recent published books are I Do! I Do! I Do!; High Cotton Christmas, Simply Southern Christmas; Hey God— Let’s Talk, 50 Shades of Southern, 14 Steps, and Walking Up On Murder. She is currently writing the second in the Glad Girls Mystery series, Bone Dry Martini. 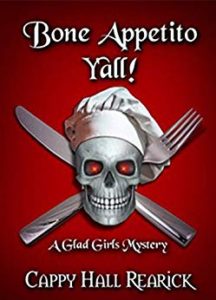 The Glad Girls, four women of a certain age, break from their normal routine and small-town Sabula, North Carolina life for ten days at the Abruzzo Cibus Cooking School and Palazzo Tour d’Eau in Carunchio, Italy. They are surprised to run into Jimmie Claire Henderson, an old friend. When her husband disappears, the Glad Girls find themselves smack in the middle of a plot that thickens like gravy with each turning page.

Will a double murder be solved by Italian law enforcement officials or will the meddling Glad Girls capture a killer and solve yet another mystery?

Shrouded in intrigue that concludes with a shocking outcome, the Glad Girls return hope to return home with another amazing tale to tell. AMAZON

Stay Tuned for More … Join the Glad Girls as they take off on a road trip to St. Simons Island, Georgia. Other road trips of theirs included spas, massages and happy hours. Not so this time. Television columnist and occasional Glad Girl, Bailey McGee’s husband, former detective Finn McGee has suddenly vanished. One Help me! phone call to Aunt Polly is all it takes to bring the full complement of Glads rushing to St. Simons Island and Bailey’s side. A dark evil has penetrated the otherwise sunshine bright island resort, and Bailey is convinced that her husband Finn has fallen victim to the darkness. With the help of the Glad Girls and aided by Claudette Fersner’s husband, also a former police officer, Bailey puts all of her faith, hopes and prayers in the collective energies of her Glad Girls family. Will the Glads find Finn McGee before the evil forces get rid of him in order to stop him from exposing them? Will Bailey’s cyberstalker remain anonymous via texts and phone calls, or will she join the vigilantes and continue stalking? Will the Glad Girls escape the mounting peril in which they find themselves? AMAZON

It was a girl’s getaway weekend full of fun until …

Meet The Glad Girls, four women of a certain age. Claudette, Darlene, Polly and Bailey find mystery without having to look for it when they stumble smack into the middle of murder.

Claudette Fersner, local newspaper columnist and occasional small-time television interviewer, is married to the former Sabula, North Carolina Chief of Police. Claudette can smell a mystery thirty miles away from home. And she does.

Darlene Funderburke, better known as a former beauty queen who still wears a fake crown, is vain, over-the-hill, kooky and way past ready for a road trip. She wants a good massage and a complete do-over.

Bailey McGee, occasional North Carolina visitor and full-time resident of St. Simons Island, Georgia, joins her friends for what looks to be a relaxing, if hedonistic weekend away from home. Like Claudette, Bailey is a television columnist and looks forward to a needed break.

Polly Middleton, octogenarian aunt to Claudette and Bailey, is the lovable curmudgeon you want to throttle. She can and does keep things stirred up and stays true to form even when miles away from Sabula.

The Glad Girls break from their normal routine and deadly boring life in small town Sabula at the posh Royal Hotel and Queen for a Day Spa thirty miles away in Asheville. They do not count on Ethelene Deloach, the most disliked woman in Sabula to follow them to their chosen retreat, but she does. Aunt Polly would love to toss her down the elevator shaft and be done with it but before she can make good on her threat, Ethelene’s murder becomes a reality. As usual, the Glad Girls find themselves in the middle of a plot that thickens with each turning page.

Enter the local police, the FBI and even Sabula’s present and former police chiefs, Clyde Fersner and Jack Hoover (no relation to J. Edgar).

Will a series of hotel murders be solved by law enforcement or will it take the Glad Girls doing what they do best (meddling) to capture a serial killer and solve yet another mystery? AMAZON

With One Foot In Front Of The Other, The Glad Girls Walk Up On Murder

Meet The Glad Girls, three women of a certain age.

Claudette Fersner, newspaper columnist and occasional small-time television interviewer is married to the former Police Chief of Sabula, North Carolina. She has a nose for mystery.

Darlene Funderburke is better known around town as the former Mountain Laurel Queen who never gave up her crown. She is the wife of Buster, the local pest exterminator, but she becomes a widow when The Glad Girls walk up on Buster’s murdered body.

Polly Middleton, Claudette’s lovable and bossy octogenarian aunt, walks each day in the cemetery with The Glad Girls and her fifty-pound dog, Barbara Boxer. Aunt Polly is never shy when it comes to letting her opinions be known.

After discovering Buster’s body, The Glad Girls set out to solve the mystery. Their quest becomes urgent when Darlene is named the #1 suspect. Meanwhile, two more victims turn up dead in the cemetery, both connected to Buster and by default also to Darlene.

Shrouded in mystery, the Sabula cemetery becomes a burial ground in more ways than one. Can the local police find the murderer before someone else turns up dead or will The Glad Girls solve the mystery and get their friend Darlene off the hook? AMAZON